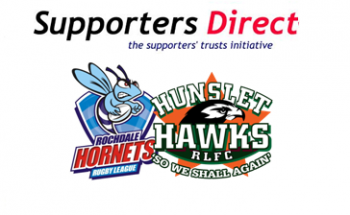 The Hawks and Hornets will come head to head on the field this Sunday, as both team compete for the Supporters Direct RL Shield. Although Sunday will see both teams going for victory on the pitch, both clubs will continue to work together off it, as both continue to champion the supporters owned model that has brought sustainability to both semi professional clubs.

Both the Hornets and the Hawks have faced financial difficulty in recent times as, for varying reasons, and both clubs faced going into oblivion despite their respective rich history.

Led by a board elected by the members, the Hornets have gone from strength to stregth, winning their first trophy in 91 seasons last year.

Hemel Stags and Bramley Buffalos have all since followed the model that allows supporters a greater say in the running of their club.

One body that provides ongoing support is Supporters Direct.

Supporters Direct represent over 180 supporters trusts accross Europe with over 400,000 members, helping supporters have a voice within their clubs.

Supporters Direct have kindly agreed to donate a shield that will be presented to the winner of Sundays game, with the aim of the shield being played for annualy by 2 supporters owned trusts.

Pre match dining is available, at the special price of £20 per person, which includes hospitality seating, 2 course lunch and your match ticket.

There is still room on the ‘Naughty Forty’ supporters bus to travel to Spotland, contact Geoff Crewsick to book your seat on the coach, Call 077380568650