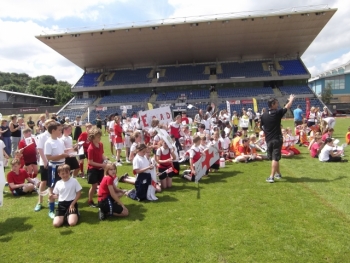 The Queen’s Baton passed through Leeds on its way to the Commonwealth Games in Glasgow via all the Commonwealth Countries.  The Baton came to the home of the Hunslet Hawks where it was met by over 500 youngsters from local schools.

The tag rugby was all about having fun, and so there were wasn’t a winning team, but the boys and girls from Roundhay St John’s and Rothwell Primary schools did appear on Look North for tackling the presenter.

The Hawks mascot, Harry, couldn’t resist the temptation to come and join in the fun along with recent signing Marcus Elliott.