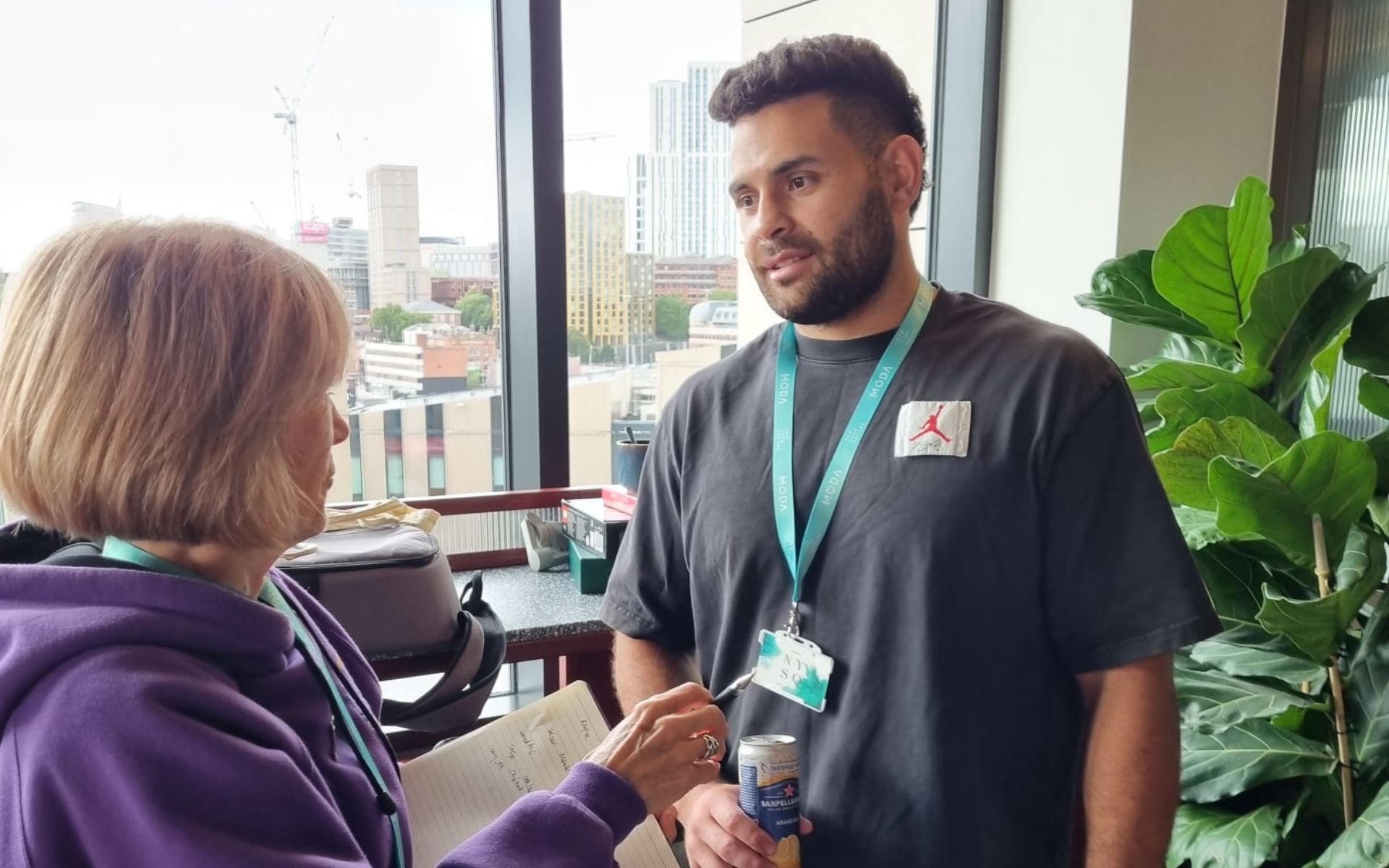 “It’s good to have three Hunslet fans together,” James Deighton of Radio Leeds used as his opening gambit. But then he blotted his copybook a bit by joking, “It doesn’t happen very often!” Cheeky. We were at Moda’s new residential development, New York Square, the next stage in the redevelopment of the SoYo area of Leeds. Moda, through their connections with Leeds Rhinos, welcomed press and players to take a sneak peak at their state of the art gym and use their amazing private dining room and lounge as a backdrop to interviews.

Members of the press were invited to record interviews for national press with crews filming all the players.

Kiwi, Nelson Asofa-Solomona – what a giant of a man, I should have asked him what his mother fed him on as a kid – he was saying it was a bit of a shock when the team went running in the local streets that morning from their base at Headingley. I’m not certain if he meant the weather or the back-to-backs, or just the general shock of early morning training. It was all busy, busy, busy.

Back-up staff were also there so I picked the brains of Richard Becht from the Kiwis about whether jet-lag had affected them. I now have a reasonable set of tips on how to avoid it, which I’m happy to pass on to you intrepid travellers who still haven’t learnt that long, annoying airport delays are part and parcel of air travel nowadays and maybe it’s best to stay in the UK.

Top tips: First, they were all issued with a transparent plastic hydration mask which covered their nose and mouth and, along with a spray, kept the nasal passages clear. They also had hydration drinks and were encouraged to drink three litres of water per day. “Hydration is very important for athletes.” Next they were told not to sleep on the first 13-hour leg of the journey to Singapore, just nap. Once on the second flight to the UK, they could sleep so that when they arrived at 6am, they would be able to stay up that first day in the UK sun. Lastly, they were given melatonin tablets to take on arrival, and a sleeping tablet if they needed it for that first night. So that’s how to avoid jet-lag.

Kruise Leeming and Aiden Seizer were there representing the Rhinos. I tried to teach Aiden how to say Yorkshire (Yorksha) properly, but I’m not sure he got it; he had lived at New York Square’s sister development, Angel Gardens, in Manchester for a bit, after all.

Not officially on duty was Rhyse Martin. You will remember we had three PNG players with us for a spell: – Charlie “he’s got a pineapple on his head” Wabo, Michael Mark and Nico Slain. I used to take them out once a week and was lucky enough to visit PNG to meet up with Charlie and Nico. Since then, PNG has been my team, so I’m afraid I cornered Rhyse. He is the PNG captain (as well as playing for a north of the river team.).

We had a good chat about all things World Cup and PNG. Although born in Cairns, QLD, Rhyes has strong PNG roots through his father, who was born just outside of Port Moresby.

He predicts Tonga are the team to watch but he is confident PNG will claim a quarter final place.

Conversation turned to the PNG Orchids women’s team, who will be competitive. Look out for Elsie Albert, especially, was his insider knowledge. The Kumuls go in to camp later this week with the Orchids following two weeks later.

Chatting about family life, Rhyse has been lucky enough to have visits from his mum this year and his cousins will be flying over for the tournament. He’s settled well in the UK with his partner and baby, and has even brought his dog over from Australia. He’s signed a two-year extension (not the dog, obviously) for Rhinos.

I then got him to sign my autograph book and showed him the 2017 autographs in there from PNG – and there he was as playing at number 11. Then we turned over the pages and found his autograph again, so I’ve got him three times! He was such a pleasant guy and very patient so I don’t mind. He also signed a Hunslet shirt to be raffled. He’s promised to look out for my PNG flag at matches!

These are all little titbits but they show how approachable our elite Rugby League sports stars are.

If you can stand crossing the river, the Orchids play at Headingley in a double-header on Wednesday 9 November. Exciting times!