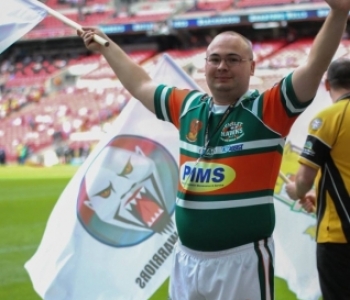 You may recall in the York programme we mentioned that Hawks season ticket holder Simon Hirst was representing the club as a flag bearer at the challenge cup final at Wembley, well we caught up with Simon to see how the experience went for him….

Clocked off work early, went home got my suit case and myself sorted and caught the train to London with my best friend, who unfortunately is a Rhino fan, but hey ho, no one is perfect. Once in London, we checked into our Hotel in Waterloo and met up with some friends in Clapham junction for a meal before heading back to the Hotel for the night. Due to excitement and nerves of the cup final and my upcoming duties, I could not sleep through the night, I woke up at 1:30 and 4:30am before getting back off again.

The big day is here! I got up at 7 am and put on my hawks kit with pride, then made sure I had all my photo id and other information that I needed for the flag parade and access to Wembley stadium. I headed down for a full English breakfast in the Hotel restaurant. Once we had eaten, we then got on the tube as I had to be at the stadium for 10:30am.

Whilst walking up Wembley way (at around 9:30ish) I was surprised to see many fans milling around at that time, it was good to see as the atmosphere was building up nicely. Once I reached the stadium, I signed in, got my access badge and went into a room, under the stand where the Castleford supporters would be sitting, with the other flag bearers, where we had a briefing on the day ahead and what would be required of us.

Once we had a briefing we had 2 pitch rehearsals and then a quick drink and bite to eat. Just doing the rehearsal gave me goose bumps, so imagine what it would be like walking out in front of 77,000 people a bit later on. I even took a Selfie on my mobile phone! After the rehearsal and a debrief I went pitch side with a couple of other flag bearers to watch the School boy final and to see the stadium starting to fill up, which got us all excited.

Around 1:45 we had to go back to the room to get ready for the parade. Then at around 2:30 pm we lined underneath the tunnel stand ready to walk out for 2:45pm. Whilst waiting Ben Thaler and Steve Ganson walked past us to a sound of boos and jeers, cant think why?. I was excited and nervous as I could see and hear the crowd.

2:45 we walked out and was hit by a sound of 77,000 supporters cheering, it was unbelievable. Once the parade was finished we took up our respective positions, waiting for the 2 teams to come out for kick off, and I was stood behind the try line, near the corner flag at the Leeds Rhinos end,.  To my left Pat, Ben and the rest of the Benatamine family were cheering and waving with their Hunslet flag which brought a lump to my throat. Once the teams came out we stayed on the pitch, we sang abide with me and the national anthem, which was emotional, as it made me think of my granddad who I was close to, and always watched the challenge cup final.

Once the formalities were over, we marched off the pitch, handed the flags back and sat in our seats to watch the game. The game for me was very entertaining, with Leeds deserving there victory. After the game we headed back to the hotel to freshen up for the evening. We went for another meal and did the tourist thing by walking round Piccadilly and went past the Houses of Parliament and the London Eye.

Tired but still buzzing from the day before, we got the train 9:30 train back to Leeds and had a laugh with some Warrington fans. Around 1pm I walked through my front door, tired but elated, still trying to take in what has just happened.  What I did at Wembley will stay with me forever and it really was one of the best experiences of my life.

“Thank you Hunslet Hawks for allowing me to represent the club, it meant the world, and hope I did this great club proud”.