The Pryce is right for the Hawks’ ‘marquee signing’ 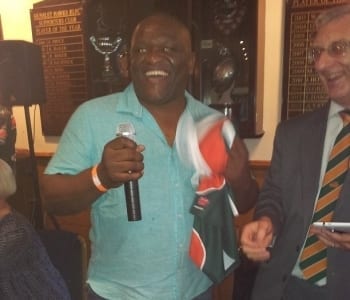 With only a few days to go before the Jane Tomlinson Leeds 10k the “Fly with the Hawks” team have announced their marquee signing.  None other than Hunslet legend Steve Pryce.

Stevo joins ex-teammates Mick Coyle, David Brook and Richie Baker in the team,  and Richie in particular was delighted to hear the news. “I’ve been suffering with a hamstring and it was probably 60/40 as to whether I would make the start line. However, the signing of Prycie has given everyone a lift.  He was inspirational as a player and will lead us to great things on Sunday”.

Steve, who is now mine host at the New Inn Churwell, commented “It’s a great to be back in the famous myrtle white and flame shirt.  I’m looking forward to leading the team to glory”.

The full team is: