The Scandinavians Are Coming !! 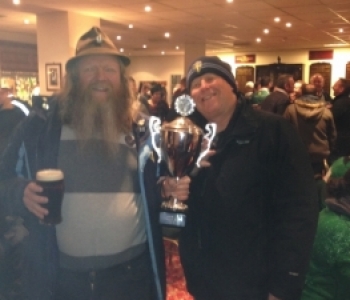 The Scandinavians have long since had a love affair with English Football and every weekend sees thousands fly over to watch their favourite team in action. All the big English clubs are followed with a great deal of passion, but you probably wouldn’t know that Leeds United is still in the top 4 or 5 best supported teams over there.

They have their own Magazine that is quite a professional glossy affair called The Peacock News and is some 100 pages thick.

Every week whether Leeds are at home or away a large number fly over to watch their beloved heroes, upto 250 at a time for some home games; even despite the fact Leeds haven’t been fairing so well over the past ten years. In fact several of the visitors that Hawks die hard supporter Steve White is acquainted with fly over for just about every game home and away.

It’s strange that Rugby League hasn’t been tried over there because all Steve’s Norwegian & Swedish friends who have attended Hunslet games over the years have really enjoyed the sport and the experience. An opportunity the RFL could maybe look to expand into.

We will have over 30 Scandinavians attending South Leeds for the York City Knights game and hopefully a good number will have whetted their appetite enough to make us their second team to support in England and pay us future visits when our games fit in with their weekend trips for Leeds United fixtures.

The club would like to thank Rune B Reitan for his help in mobilising his countrymen to visit us.

A free jagermeister awaits our Scandinavian visitors in the Phoenix Lounge on Sunday 09th March.