This Girl Certainly Can !! 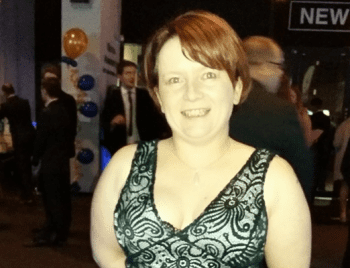 As well as doing a great job for the Hawks on match day our very own match day volunteer, Amanda Binns also finds time to inspire other women to get active.

In less than 2 years Amanda has gone from couch potato to an accomplished runner. Not satisfied with looking after her own wellbeing Amanda has now qualified as a run leader and is encouraging others to take up the sport.

“I had the honour of being invited to the Leeds Sports Awards by the “Leeds Girls Can” team. I was interviewed on stage about my running and how the campaign had influenced me.

The adverts that the campaign used showed “normal” women doing a variety of sports, it also encourages women to embrace their differences and to be less self-conscious. It showed me that you don’t have to be tall and skinny to be a runner and I have proved that to myself.

Getting on stage was the scariest thing I have ever done in my life, including the first time I turned up at South Leeds Stadium to meet a group of women I had never met before to go running. I was able to hide my nerves (I hope) and talk about how I went from no running to training 3-4 times per week plus races. Most of my friends at Hunslet Hawks are aware that I am intending to run 12 races in 12 months to raise money for the Leeds Children’s Hospital. This is a massive undertaking for me, I couldn’t run the length of the car park at the stadium 2 years ago.

The awards and winners were amazing and Leeds is a city with a great number of dedicated sportsmen and women and I am proud to be part of this, even in my own very small way”.

Everyone at Hunslet are really proud of Amanda and her commitment to the Club and community.  If you would like to support Amanda in her fundraising efforts you can visit her Just Giving page