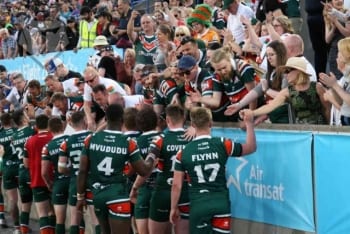 Hunslet were the first Yorkshire club to visit Canada since Toronto Wolfpack joined Kingstone Press League One this season.

They flew to Toronto on Thursday, played two days later and arrived back in Leeds on Monday.

“We had a great time, it was much, much better than I thought it would be,” he said.

“We had heard a few horror stories from other clubs who’ve been over there, but the way we were treated was absolutely fantastic.

“The boys really enjoyed it, it was a good experience and I think we did ourselves proud as well.”

Thornton felt Hunslet, who trailed 22-12 at half-time, performed better than the 56-12 scoreline suggests. They travelled without several key players, but the coach said his pack in particular rose to the challenge and proved they can compete with the best in the division.

“Lewis Reed was terrific up front, along with Jack Coventry and Nyle Flynn,” he reflected. “They have a big pack and we stood up to them and gave as good as we got.

“I was really proud of the first-half performance. It was always going to be tough in the second half against a full-time team and we ran out of steam a bit, but the young players in the team will benefit massively from the experience.

“It was good to spend some time together as a group and new friendships were formed.”

Hunslet’s squad had a recovery session at training yesterday, five days before a vital home game against Coventry Bears.

Jose Kenga needed hospital treatment for concussion and is a fitness doubt for Sunday and Hunslet’s medical staff will also check on Tommy Brierley (elbow). Thornton said: “We have quite a number of pretty bad grazes.

“It’s not the best 3g pitch, but fitness-wise we are not too bad.”