Fred Smith (born c. 1885 in Woodlesford) was an English professional rugby league footballer of the 1900s, 1910s and 1920s. He played at representative level for Great Britain, England,and Yorkshire, and at club level for Hunslet, as a stand-off/five-eighth, or scrum-half/halfback, i.e. number 6, or 7. He made 319 apperances for Hunslet RLFC.

Challenge Cup Final appearances
Fred Smith played scrum-half/halfback, and scored a try in Hunslet’s 14-0 victory over Hull F.C. in the 1908 Challenge Cup Final during the 1907–08 season at Fartown Ground, Huddersfield on Saturday 25 April 1908, in front of a crowd of 18,000.

All Four Cups, and “The Terrible Six”
Fred Smith was a member of Hunslet’s 1907–08 All Four Cups winning team.

Testimonial match
At the end of the 1919–20 season, a Testimonial match for both Bill Jukes, and Fred Smith, took place between Hunslet and Billy Batten’s Hunslet XIII, a team of former Hunslet players, including a 48-year-old Albert Goldthorpe, who scored a drop goal, the match took place at Parkside, Hunslet. 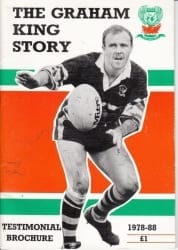