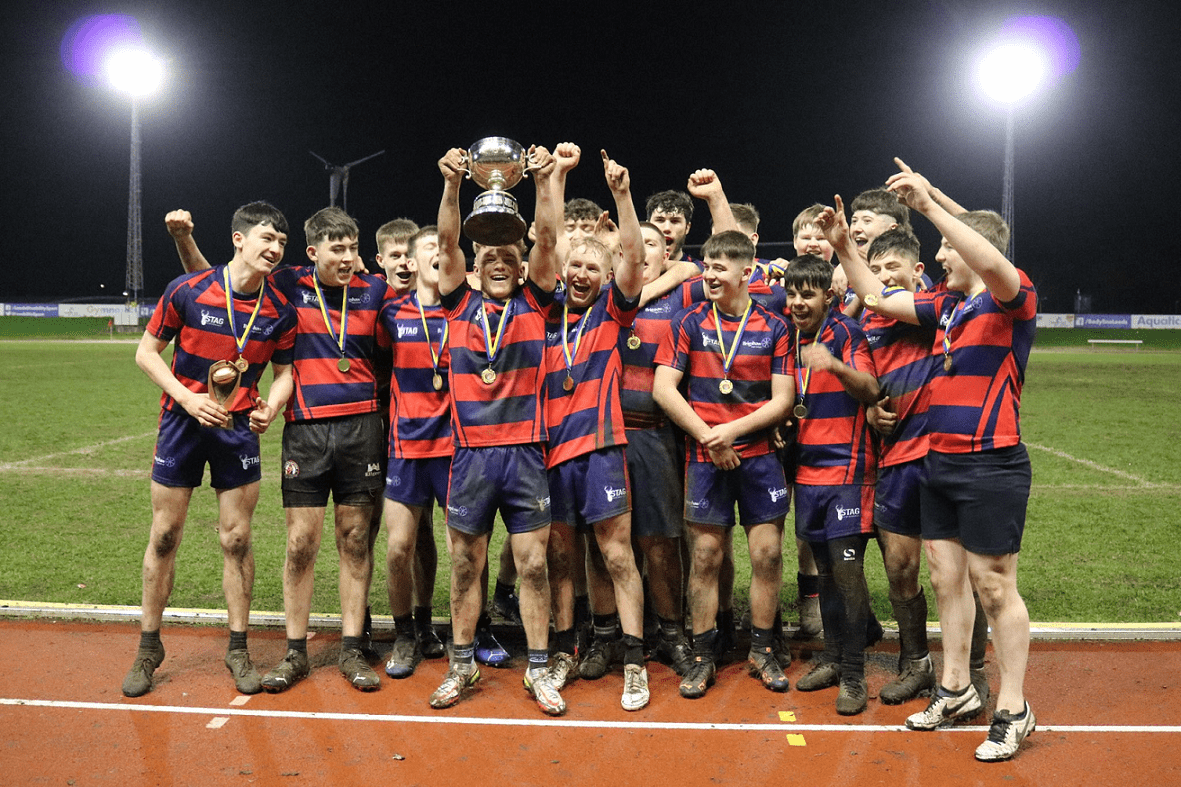 Part one saw the deciders for the Goldthorpe Cup (Year 8) and the Harrison Shield (Year 10). Four tries from player of the match Kane McNamara helped Brigshaw to a comfortable 38-6 victory over Farnley in the Goldthorpe Cup Final. Farnley were also runners-up in the Harrison Shield Final, but this was a much closer game. Temple Moor held a 10-8 lead at half-time and the second half looked to be finishing scoreless until Farnley’s impressive stand off Freddie Butler scored a solo try with only minutes remaining. However, with his third try of the game in the dying seconds, player of the match Callum Webster regained the lead and secured victory for Temple Moor 14-12. Whilst the medals were handed over by Leeds Rhinos players, the trophy presentations maintained a link with the Hunslet club: the Goldthorpe Cup being presented by Steve McGrail (the great-grandson of Albert Goldthorpe) and the Harrison Shield being presented by former Hunslet player Alan Charlton, whose name is on the shield as the winning captain of Belle Isle School in 1966-67.

The second evening of finals saw the only south of the river school in this year’s deciders: Cockburn, whose Year 7 side were unlucky to lose the Gilston Cup Final 16-12 to Brigshaw, after leading for most of the game. Cockburn’s try-scorers were Lennon Kelly, Dillon Eshun and Deacon Hargreaves, but two late long-range tries by Cordel Esprit turned the game Brigshaw’s way. The Year 9 Lee Trophy Final produced a similarly close game: Allerton Grange winning their first ever major trophy with an 18-14 victory over Cockburn. Stars for Allerton Grange were Jackson Cummins, who kicked well and ran the game from stand off, and Freddie Wood, who scored three tries. The last match saw Brigshaw complete a comfortable victory over Leeds West, who despite losing 38-6, still contributed much to an entertaining game. An excellent Brigshaw spine, led by player of the match Harvey Smith, was crucial in their victory. Both teams had featured in the Yorkshire Cup semi-finals, with Brigshaw going one step further to meet Halifax side Brooksbank in the final.

Two other finalists are hoping to make further progress in the Yorkshire Champion Schools Competition, having all qualified for the semi-finals. Brigshaw Year 7s have been drawn away to Sirius (Hull); Crawshaw Year 9s will travel to Castleford Academy.

The next local competitions to be decided will be the girls’ indoor touch rugby competitions at Years 7 and 8.

Photographs show Alan Charlton presenting the Harrison Shield to Temple Moor and a team-shot of Cockburn Year 7 from earlier in the season.