“FOOTBALL ROWDYISM – What is the Matter with the Huddersfield Crowd?” 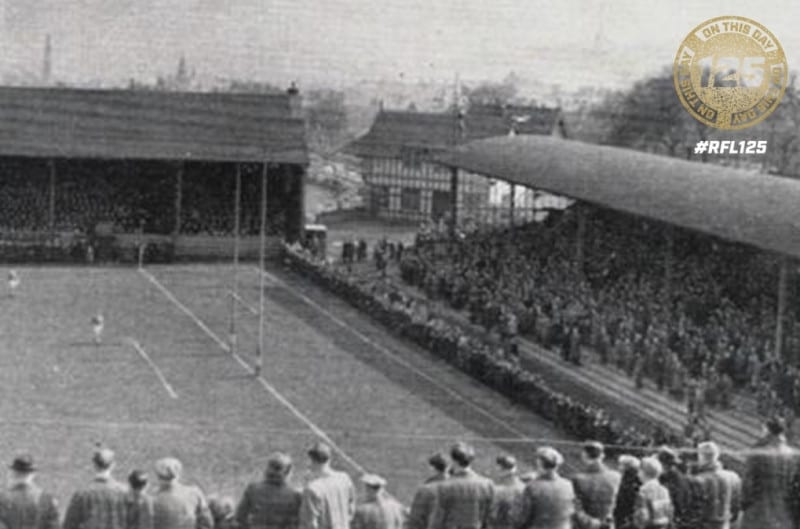 Who hasn’t, writes Pat Benatmane with tongue in cheek, asked themselves that from time to time? It was the same in 1907, as reported in The Yorkshire Evening News on Monday 25 February. Over 5,000 spectators had gone to Fartown on the Saturday to watch Hunslet take on Harold Wagstaff’s Huddersfield. Previous matches had been contested “in the best spirit” and the first ten minutes seem to have been played that way. The trouble seemed to start with an incident in which ‘Tubby’ Brookes, the Hunslet forward, was involved. He, it is alleged, “charged Bartholomew after that player had parted with the ball.” The News reporter, though, laid no blame at Tubby’s door, saying, “Brookes pulled up as quickly as he could after the player (Bartholomew) had taken his kick.” Then “both the home players and spectators seemed to lose control of themselves.” The spectators seemed to think that only Hunslet were employing rough tactics, whilst Huddersfield players indulged in tactics, which “would have justified the referee in giving two of the players, at least, marching orders.” Things were hotting up for the Hunslet players, who’d been warned before the match started to stay close together at the final whistle. It seems Leeds had been badly treated previously at the end of their match at Fartown and since the Leeds incident all visiting players to Fartown had been protected in a similar manner, in accordance with the instructions of the Northern Rugby League Committee. The referees also had a dressing room which was constructed for the safe accommodation of officials after a previous “scene” at Fartown.

So the whistle went at the end of the match.  “Immediately `Time!’ was called the referee went direct to his dressing room and was in no way molested. The Hunslet players, who had to walk about 200 yards to get from the ground to their dressing room, were escorted by home officials and policemen.” Scuffling broke out and missiles were thrown at the Hunslet players, especially Brookes. “As far as can be ascertained not a single Hunslet player was struck. The only person who received any injury whatever was Detective Webb, who was caught on the head with a piece of clinker and in the face with some brick.” Webb was protecting Brookes, along with uniformed and plain clothes police who had been in the crowd – so the authorities knew the Fartowners’ reputation for roughing up the opposition.

The problem now was how to get the Hunslet players out of the ground. Abandoning their luggage in the dressing room, they were “accompanied out of the top gate by Huddersfield officials and seen safely into a tramcar at Norman Road….The ground was cleared as quickly as possible, and when the crowd got into Staines Road they amused themselves by pelting drivers of passing vehicles with banana skins.” Such vandals – chucking banana skins into carts!

`We had been warned something might happen at the close of the game,’ said Albert, `and that it would be safer for us all to keep together. The police and officials did their utmost to protect us, and it is due to them that we were not seriously maltreated. One man tried to strike me, but the police were too quick for him.’

“Continuing, he said, `A crowd of some hundreds waited for us outside the dressing room, but we circumvented them by leaving our luggage in the dressing room and making our departure by one of the top turnstiles. We managed to secure a tramcar, and in the company of some 20 constables finally reached the station without incident.’”

The team arrived back by train and did not intend to report the matter to the Northern Union authorities. The Yorkshire Evening News speculated whether the referee would report it or not. Interviewed the next day, the referee, Mr W Robinson of Bradford, said about the two tries which Huddersfield claimed, and which were disallowed, “The player passed yards forward in each case. They might have scored, and they had chances, but the passes were palpably forward.” As for the Brookes incident, Mr Robinson claimed, reported the Evening News, “he did not see the incident, and he could not act on what he did not know… he had done his duty to the best of his ability, and he had no experience whatever of hostility.”  So there are some advantages to having a video ref – and walking off quickly without looking back.

At least one Huddersfield fan sent in an irate letter to the paper, not decrying Hunslet, but pointing the finger at the Fartowners. “I really feel constrained to complain of the conduct of the Huddersfield spectators on the stand, whose language would have done credit to Billingsgate. Scores of the most vulgar expletives were hurled at the Hunslet players, while such words of encouragement were yelled out to the Huddersfield players when one of them happened to be tackled as `Put t’ ball dahn and pawes t’ _________.’  then at the close of the game the crowd of boys and youths were allowed to hang around the visitors’ dressing room.”

I wonder what words the paper felt obliged to censor? Pause to smash him? Pause to kick him in the goolies? Pause to give him a welcome hug? We’ll never know, but the correspondent known as FARTOWN GREEN, in time-honoured fashion, blamed the referee. Nothing changes.