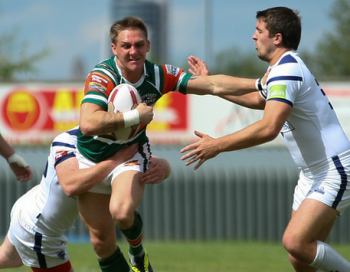 5 try hero Gavin Duffy has been named the Kingstone Press Championship One Player of the Week.

Hawks coach Barry Eaton said: “Gavin’s been great since he came to the club, and he’s probably now scoring at a rate of more than a try a game.

“But he’s not just contributing in attack. He’s been really good in back-field, solid defensively, and his kick-returns have been great. He’s added another dimension to our game.”

He added: “The whole team played well against South Wales. Gavin finished his tries well, but some of them came from some lovely attacking play.”

Congratulations to Liam Mackay & Luke Briscoe who made the team of the week.