A role to relish at Hunslet for Ellie! 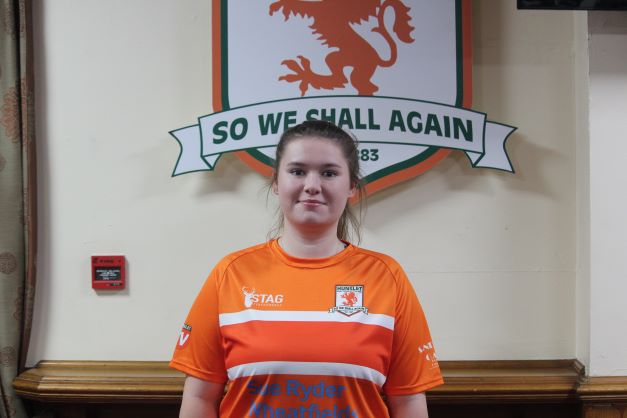 The dream job! That’s how Ellie France viewed the role of physio at Hunslet Rugby League club when she saw the position advertised – and, a matter of weeks since commencing her duties, she’s had no cause to revise her opinion.

Quite the reverse in fact. Despite being a Wakefield Trinity supporter (all is forgiven, Ellie!) the 22-year-old, who has brought in a couple of fellow students from Leeds Beckett University to assist her, is delighted to reflect that she has been welcomed with open arms by all at the South Leeds Stadium. She says: “I’ve been given a warm reception by everyone at Hunslet, it’s a very friendly club. In fact one of my students – Sophia Szczomak and Cameron Rushforth are working with me – remarked that it feels like I’ve been here years, which was nice to hear.”

The fact that Ellie France is at Hunslet at all can perhaps be traced back to a `Sliding Doors’ moment. She confides: “I became hooked on Rugby League when my dad took me to a Wakefield Trinity match when I was ten or eleven years old. He’d taken me because there was a concert on at half-time – an act from Britain’s Got Talent that I wanted to see, I can’t even remember who they were now – but I was absolutely overwhelmed by the rugby.

“There was a huge tackle inside the first ten seconds, and that was it for me. I instantly became a huge Rugby League – and specifically Wakefield Trinity – fan.”

Around ten years down the line Ellie, who lives in Wakefield, remains a Trinity supporter, but she’s developed a strong affinity with Hunslet in the short time she’s been with the Parksiders following – after graduating last July with a degree in sports therapy – stints elsewhere.

A spell as a voluntary physio at Bradford Bulls followed equally enjoyable early experience with Castleford Tigers Academy. Ellie then found herself at Rotherham United ’s Academy side for a couple of months before seeing the Hunslet job advertised. Happy as she was at Rotherham, she simply had to apply, given that Rugby League is her abiding passion. She recalls: “I was lucky enough to get it – it looked like the perfect job for me, and I was offered the position a couple of days after my interview.

“I’m two months in now, and it’s nice to be working in Rugby League again. It’s good, too, to have a range of ages under my care. Head coach Alan Kilshaw has signed a lot of young players – a few of whom are younger than I am – while there are also several players in their 30s, or who are pushing 30, in the squad. It’s an interesting mix; older players tend to need a bit more `tlc’ in that they can often be carrying a long-term underlying injury or two.

“The good news is that right now the squad is mostly injury-free, and I’m enjoying working with our conditioners, Steve Morton and Ieaun Fairclough, and with Alan Kilshaw and his assistant Ryan Jackson.”

She concludes: “I knew that I wanted a job in Rugby League. I was never going to be a player, and I did consider working in the media, but I opted for physiotherapy. I’m a physiotherapist in my day job, in the NHS, so the roles are complimentary. And what made my mind up as much as anything to go into physiotherapy, perhaps, was that I was a carer for my mum, who had breast cancer, all the way from 13-21, whilst still studying with my university and college work. It was difficult but it’s definitely made me the person I am and, looking back, I wouldn’t have had it any other way.