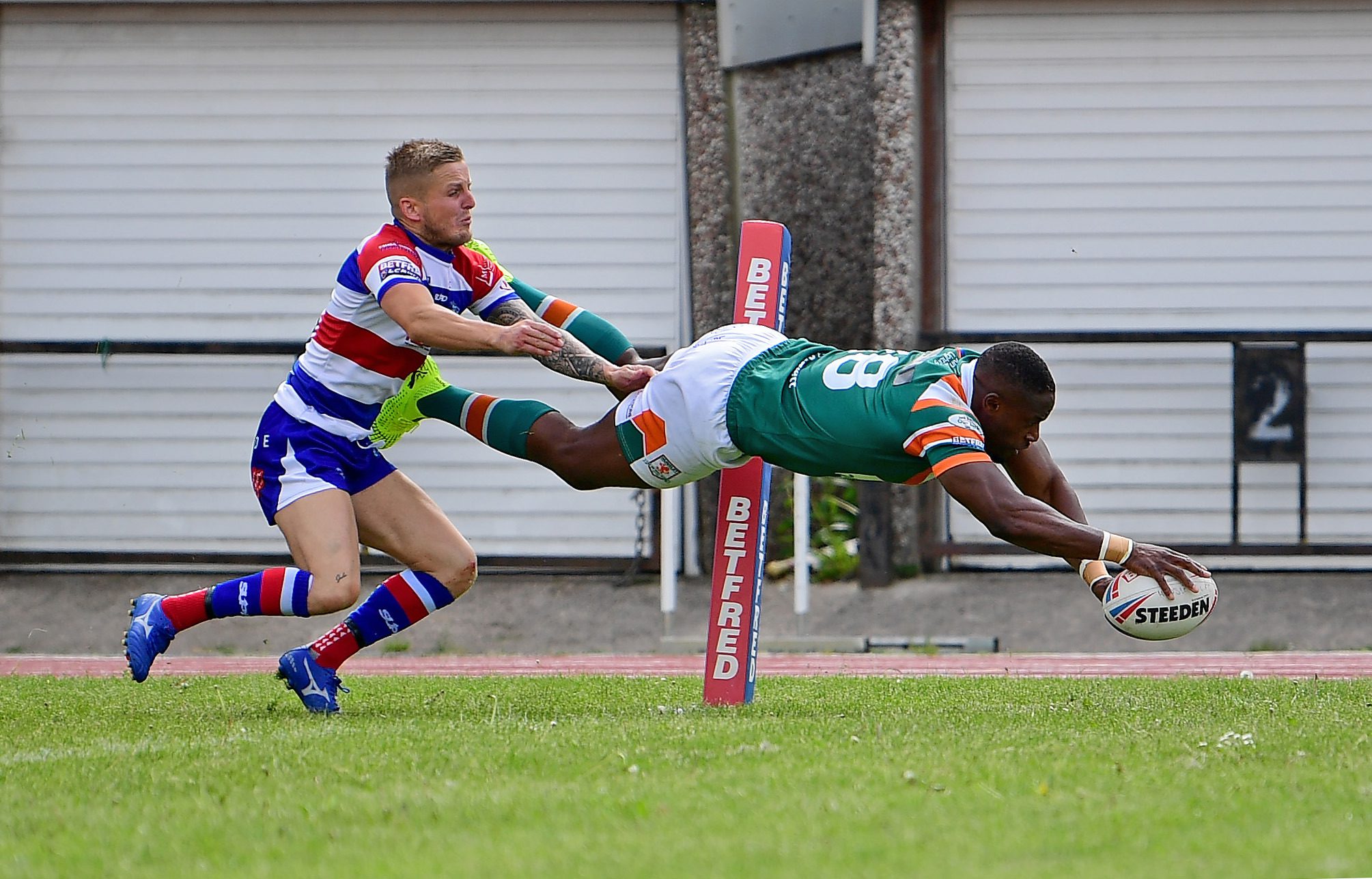 There was every indication, on the evidence of his stunning debut against Rochdale on Sunday, that Alex Brown will light up Betfred League 1 this season.

The free-scoring former Sheffield Eagles, Batley Bulldogs and Dewsbury Rams winger dotted down in spectacular style with his first touch in Hunslet colours, in the tenth minute – and his second score, early in the second period and again involving a stylish swallow dive, again got the fans out of their seats and went some way to propelling the Parksiders to a 36-22 triumph.

It may be a matter of some concern to Hunslet’s opponents this season that it could well have been more. Brown, whose boot scraped the touchline as he sped down the South Leeds Stadium flank for what would have been his hat-trick try, says: “After a year out I’m not firing on all cylinders yet, and maybe missed one or two opportunities because of that.

“In all the circumstances, though, I have to be happy. I’ve kept fairly fit during the long Covid-19 lockdowns, but there’s nothing like match fitness in Rugby League. My last game was for Underbank in the National Conference League in February last year – I’ll be even happier when I get two or three games under my belt.”

Brown, for all his fine finishing, is at pains to pay tribute to his hard-running centre Tom Ashton, who gave him high-quality service throughout against Hornets and who is himself a potent attacking threat. “Tom and our halfbacks Dom Brambani – before he had to withdraw at half-time with a calf injury – Jy-Mel Coleman and Dave Gibbons, together with fullback Jimmy Watson and our forwards as a whole, worked good openings for me, and it was an enjoyable day for me both on and off the field,” he says, confiding, “I’ve really missed playing, and being involved in a team environment. There’s nothing like the `crack’ of a Rugby League dressing room and the spirit at Hunslet is exceptional, even if there was some nervousness around before the Rochdale game, which was one we needed to win after a couple of disappointing results.

“I like to play my part on the field by giving my team-mates plenty of vocal encouragement. Mood is a massive thing in sport and I enjoyed playing a part in picking up the rest of the boys. It was great that they responded to me, and to each other, all playing their part in lifting the team.”

He continues: “If we put the same effort in each week, and play to our best abilities, there’s no reason why we cannot climb up the table because this side is far too good to be in the lower reaches. And we owe it to our very loyal and enthusiastic fans. My aim is to make a big contribution to us playing winning, and entertaining, Rugby League – and working towards the South Leeds Stadium being close to full for every home match. `Behind closed doors’ games are all very well, and there’s been no alternative until recently. But sportsmen are spurred on by supporters.”

Brown, together with several others in the Hunslet camp, is eligible to play for Jamaica and has the 2021 World Cup on his far horizon. He says: “I’d love to earn selection but it’s a matter of taking every game as it comes before then. If Hunslet play well, and I play well, than we’re all more likely to catch the eye of the selectors. My focus is on Hunslet right now, if all goes well in our chase for promotion there’s more chance of all of us being noticed.”