Brennan expecting a battle by the beach 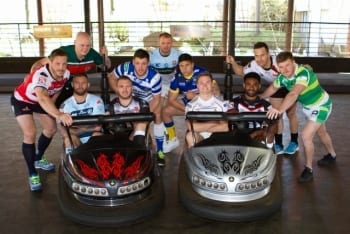 Hunslet Hawks forward Brad Brennan believes Rugby League fans are in for a treat this weekend when Blackpool hosts a full round of Kingstone Press Championship fixtures at Summer Bash.

Brennan can’t wait to lace up his boots ahead of their clash with Doncaster on Sunday afternoon (3.00pm), the sixth game of an action-packed Bank Holiday weekend at Bloomfield Road.

Brennan, who joined the Hawks after a stint with Batley Bulldogs as well as a loan spell at York City Knights last year, says the Summer Bash will provide spectators with a taste of what the Kingstone Press Championship can serve up.

“I think it will be a great showcase for what Championship Rugby League is all about,” he said.

“It’s quite a close competition with all the teams in and around each other, and there’s plenty of talent so there’s always the potential for an upset.

“Rugby League is the only sport that I know of that has events like this and I think that it’s a great way to promote the sport and I can’t wait to get out there.”

The Hawks, who returned to the Championship after securing promotion in the 2014 Championship One Play-off final, have won four games out of 12 so far in 2015.

Doncaster, however, have yet to register a win this season and go into the game without coach Paul Cooke, who stood down earlier this week. However Brennan knows his team can’t afford to take them lightly.

“It’s been disappointing for Doncaster so far this season,” he said.

“But we know that on their day they’re more than capable of winning. We can’t expect to win the game just because they’re bottom of the league.

“They’ve got some good players in their squad so it should be a decent battle between ourselves and Doncaster. Hopefully for us we travel home with the two points.”

Tickets for the Summer Bash are still available from the club shop.