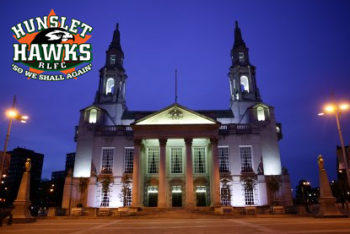 Hunslet Hawks are delighted to announce that our achievements in 2014 will be formally recognised with a civic reception.

The Lord Mayor of Leeds Cllr David Congreve will host a special civic celebration at Leeds Civic Hall on Thursday 6 November to celebrate the Grand Final winning success of the Hunslet Hawks in 2014.

The reception begins at 6pm and in attendance will be players, staff, directors, sponsors and volunteers from the club as well as the Kingstone Press Championship One trophy and our official mascot Harry Hawk.

The Lord Mayor and Hunslet officials will give interviews to the press before the speeches commence.

The club will be updating our social media channels live from the reception as well as recording the nights events for Hawks TV.