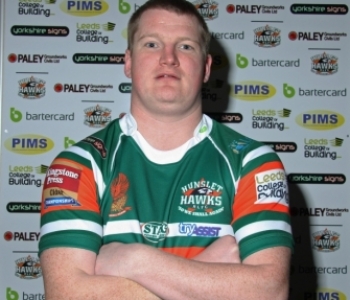 Hunslet Hawks RLFC have completed a deal to allow back row forward Chris Clough to join Hemel Stags on loan for an initial period of 1 month. Chris missed most of pre season through injury and has recently returned to full training, however with the Hawks injury situation easing Chris has found opportunities hard to come by.

Director of Rugby Darren Williams said “Our early season injury crisis has thankfully eased and we expect to have both Thomas & James Coyle along with Michael Haley and Andy Ballard available for our trip to South Wales next weekend, so this opportunity for Chris to get some minutes under his belt suits all parties as Hemel were looking for an experienced forward. “We will review Chris’s games and make a decision on his future following the initial month.“

Meanwhile Williams revealed that front row forward James Davies has left the club by mutual consent. Williams said “James came to see us a week ago and explained that his work pattern had now changed and that he would be working permanent afternoons meaning he could not attend any training sessions, we had been looking to get him out on loan; however this proved impossible due to his change of work circumstances. It’s a real shame as James certainly has some potential but as a semi professional we fully support him putting his work before his rugby. James is now expected to join Shaw Cross Sharks in the National Conference.”