Hunslet’s regular league season finished on a disappointing note with a defeat to second placed Oldham.

It meant Hunslet had failed to beat any of the top 6 sides on their home patch, but with both teams already secured a playoff place the match was really to decide who was to play who.

With Hunslet’s loss and Doncaster’s victory at Workington it now means the Parksiders will play a knockout match at home to Workington next week at the South Leeds Stadium if they are to progress towards a playoff final and promotion.

Still with many injuries and suspensions Hunslet started the livelier of the two teams when on 3 minutes Zach Braham pushed off a defender to score to the left of the posts. Sanderson converted and the home side led 6-0.

In a see-saw first half Oldham soon replied when Bridge scored after good pressure, but Hunslet felt they had cause for a penalty when it seemed Mike Emmett was obstructed chasing a Joe Sanderson grubber kick.

The best move came on 25 minutes when after Potts had intercepted near his own line Nathan Chappell broke the line and fed Lancaster, who drew his man and passed inside for Jimmy Watson to score a great try. Sanderson converted and Hunslet led 12-6.

Always a thorn in Hunslet’s side, Danny Langtree shrugged off a tackle on 30 minutes to make it 12-12 with a conversion before Nathan Chappell, who was having his best game in a while, plucked a Heckford kick from the air to score. 18-12 to the Parksiders.

With only a few minutes to half time this would have been a good lead for Hunslet to take into the break, but Oldham’s Dave Hewitt fed a lovely ball to that man Langtree to score and even the game up.

Both kickers were having a good day with 100% conversion rate and Joe Sanderson edged Hunslet ahead on the hooter with a penalty kick. 20-18 and not much in it at the break.

Anyone watching Hunslet at home this year would realize their second half performances have been under par and sensing this Oldham turned up the pressure from the off.

After the referee had awarded a couple of bizarre forward pass decisions for both sides, Oldham started to make camp in the Hunslet half. Now, Hunslet’s discipline started to wane as Crook converted two penalties for a head high tackle and lifting in the tackle respectively. 20-22 to Oldham.

Oldham looked like scoring at any moment as Lancaster had to kick dead from a threatening kick and then tried soccer control to diffuse a bomb. Hunslet’s defence was good though and although Oldham looked to have scored the try was disallowed.

Finally Hunslet made it into Oldham’s half but were guilty of errors early in the tackle count from a promising attacking position, this gave Oldham heart and on 65 minutes Crook scored and converted his own try to give Oldham an 8 point advantage, 20-28.

A further penalty for Oldham made it 20-30 before Langtree completed his hat-trick with an acrobatic try, scoring whilst it looked like he was losing the ball. 20-34.

Hunslet will be disappointed with decisions against them when both Jimmy Watson and Tom Ashton were pulled back from what looked like scoring positions when the officials ruled Oldham had been obstructed from tackling, and in the dying moments an astute Lewis Heckford kick looked to be a shoe-in try for Callum Lancaster before the ball took a bizarre bounce over his head into touch.

Oldham were worth the win though and will go into the play-offs with confidence. Meanwhile Hunslet will face Workington for the fourth time this year looking for their first victory against the Cumbrians in what amounts to the first of 3 possible cup finals.

Coach Gary Thornton will hope to have some of his players back for what is the most important game of the year. 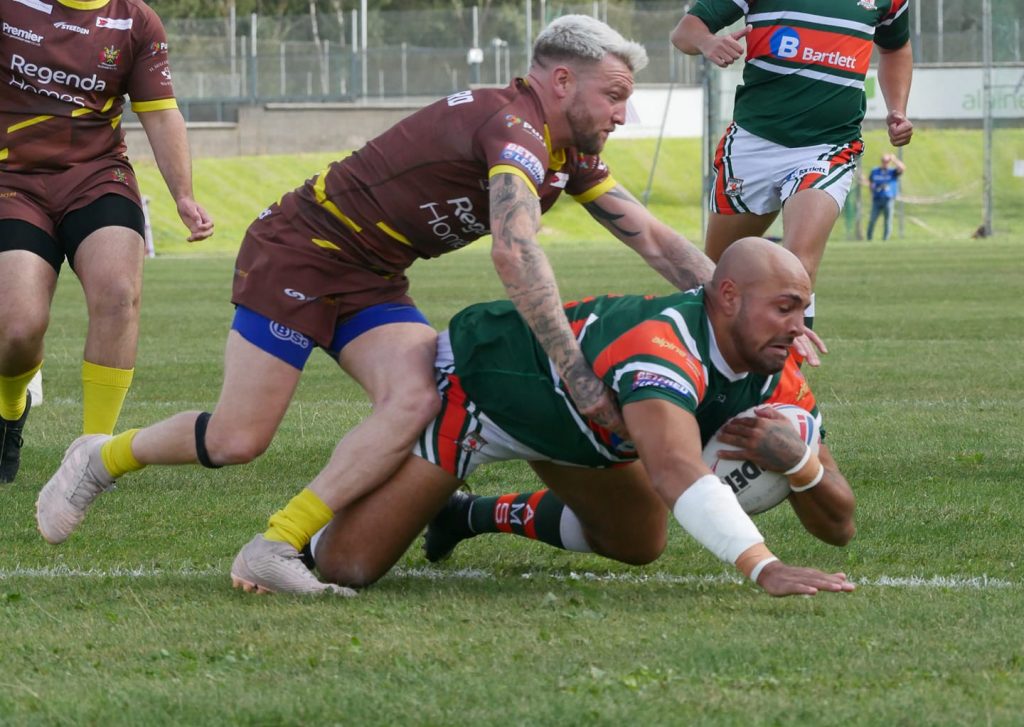 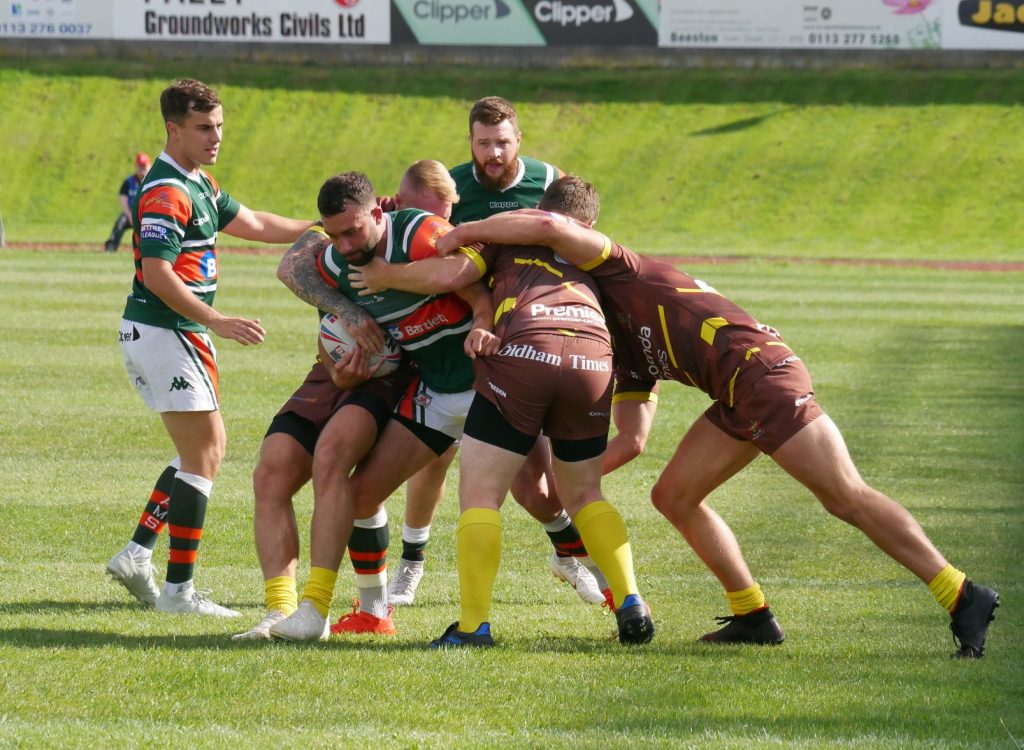 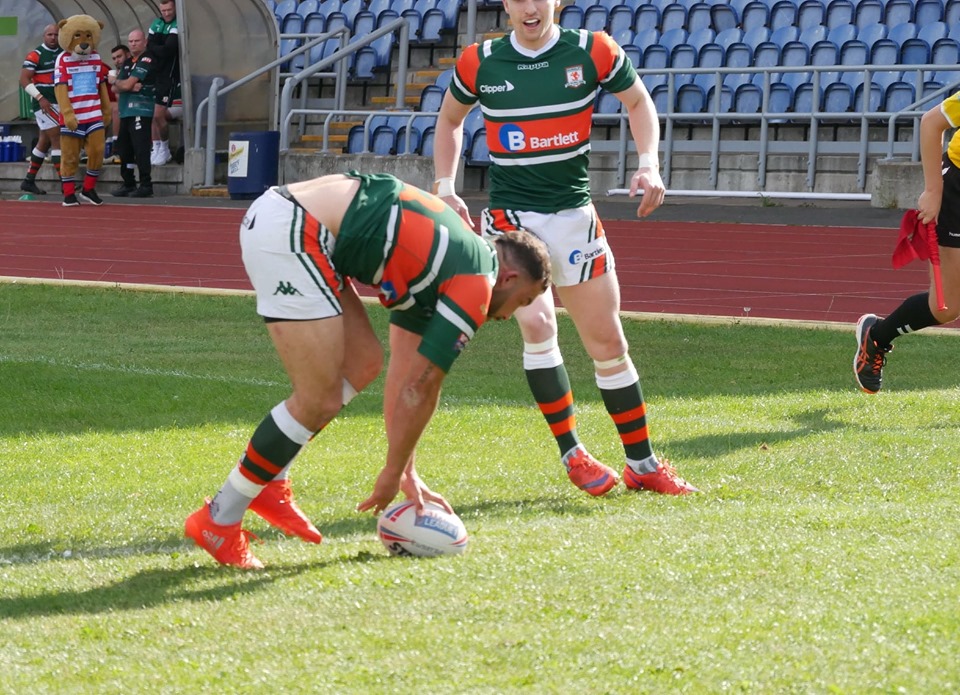