Duffy delivers and scoops Player of the Week award 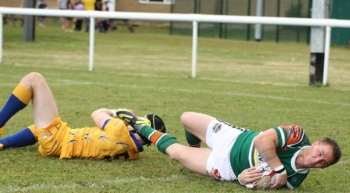 On loan Keighley Cougar Gavin Duffy is named Kingstone Press Championship One Player of the Week after a superb hat-trick at Hemel Stags.

Gavin who is on a month’s loan from the Cougars has scored 5 tries in 5 appearances so far for the Hawks and is in a rich vein of form heading into Sundays must win game against York City Knights.

Head coach Barry Eaton said “I know what Gavin can offer from my time at Keighley. He was just what we needed, and he’s settled in very well.

“He’s playing particularly well and has already scored a few tries, but against Hemel he was outstanding. A couple of his tries were brilliant finishes, and he’s doing exactly what we need from him.”

The Hawks also had 3 players represented in the Team of the Week, congratulations to Lee Brickwood, Chris Clarkson and club captain David March on their inclusion.