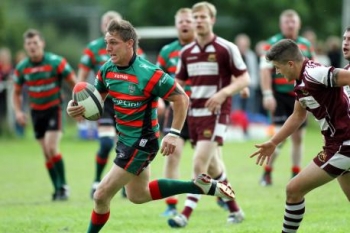 Hunslet Hawks RLFC have today completed a loan agreement with Keighley Cougars that will enable winger Gavin Duffy to join the club on a month’s loan.

Duffy has found first team opportunities hard to come by at the Cougars and recently appeared in their televised Challenge Cup quarter final defeat at Widnes.

Keighley born he is due a testimonial at the club next season having only ever played for the Cougars.
Director of Rugby Darren Williams revealed “We needed to strengthen as we only had Lee Brickwood and recent loan addition Lewis Price fit and available for the wing positions, having lost Lee Mapals recently and Andy Ballard’s continued absence though a knee injury and now Jamaine Akaidere has picked up a 6 game suspension.

Our head coach Barry Eaton knows Gavin really well and he was looking for an opportunity to play some games, so thanks to Paul March for allowing this deal to go through and Gavin will train with his new team mates this evening.“

Meanwhile Williams revealed that centre Mathew Cook and hooker Matthew Tebb have both today joined Hemel Stags on a month’s loan and will be in contention for the Stags game with York City Knights this weekend.