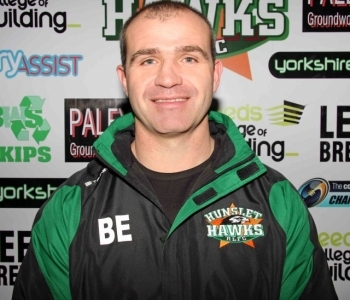 Hunslet Hawks coach Barry Eaton is relishing the prospect of a lengthy Tetley’s Challenge Cup run as we prepare to take on Workington Town this Sunday at South Leeds Stadium (2.00pm).

Eaton was pleased with the draw, which saw 10 Super League clubs drawn against one another, but still expects a tough tie when hosting the Cumbrians.

“We hope to get through first of all,” said Eaton. “But assuming we do there is the possibility of a very good draw for us.

“We’ll see at least five Super League clubs falling at the first hurdle and we would like to play one of the big teams at some stage, but it is nice to have the chance to go on a bit of a run.”

Despite being happy to have home advantage, Eaton is aware of the dangers posed by Workington, saying the visitors will be going into the game as slight favourites.

“We’re pleased to be drawn at home,” he said. “I think that’s the most important thing. It is a tough one though against a Championship side.

“Phil Veivers has had a good impact there, implementing a lot of his philosophies and I’m sure they’ll be coming down to us with momentum behind them.

“I would say we are probably slight underdogs. We’re against a Championship side in decent form, but we do have home advantage so that probably evens it up a bit.

“I’m not sure it takes any pressure off us. I think both sides will go into the game thinking ‘if we play well enough we’ll win here.’

Tickets are available for the Tetley’s Challenge Cup fourth round tie between Hunslet Hawks and Workington Town, taking place at South Leeds Stadium on Sunday April 6 (2.00pm) and are priced at £12 for adults and £8 for concessions.

Tickets for the 2014 Tetley’s Challenge Cup final at Wembley Stadium on Saturday August 23 cost from as little as £22 and can be purchased by calling the RFL Ticket Office on 0844 856 113 or by visiting www.rugbyleaguetickets.co.uk.

To take advantage of the limited-time seat upgrade offer for the Tetley’s Challenge Cup final, Wembley Stadium on Saturday August 23 please use the promotional code CCF01 to pay the price category below the seat selected (not available on £22 or £77 seats). This offer is currently available until Friday April 18