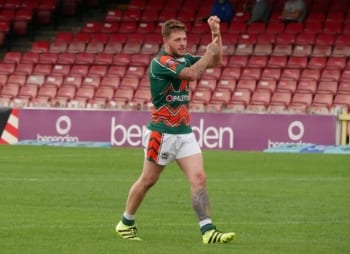 Hunslet Hawks are delighted to announce that star Full Back and fans favourite Jimmy Watson has signed a new two-year contract with the club.

The deal will mean that Jimmy will remain at the South Leeds Stadium until the end of the 2018 season.

Jimmy who is sponsored by Ben Tate, originally joined the Hawks on dual registration in January 2013 from Leeds Rhinos, but following an impressive 2014 season with the club signed a 12 month contract extension.

He made 24 appearances in 2014 scoring 16 tries including a crucial try in the Grand Final as the Hawks defeated Oldham to win the Championship 1 title.

Jimmy continued his rich vein of form in 2015, making 29 appearance and scoring 9 tries as the Hawks struggled against superior opposition and were relegated from the Championship. Jimmy went on to scoop every award at the end of season presentation evening.

2016 has seen the fans favourite make 22 appearances scoring 8 tries as the Hawks have pushed for a playoff place in Kingstone Press League 1.

Jimmy is only 2 appearances of making 100 for the club. He has made a total of 98 appearances, scoring 39 tries.

Director of Rugby Darren Williams said “Jimmy was high on our list as a priority to retain, he wears his heart on his sleeve and epitomises all that we want Hunslet to be about.

“He loves the club and he is a natural born winner with a great attitude.

“The fans adore him and the fact he’s signed for two years following Jack Lee & George Flanagan, shows that as a club we are doing a lot of things well and our players want to stay and commit their future to the club.

“We want to build the team around players of Jimmy’s quality both on and off the field.”

Jimmy told the club website “I am absolutely delighted to have put pen to paper on a new two-year deal.

“As soon as the club approached me about a new contract, there was never any doubt i was going to sign.

“The clubs supporters made it an easy decision. The support they have given me during my time here has been tremendous. I love it here.

“It’s a family club with a real family atmosphere. My partner Charlene and my little girl Layla love it at Hunslet and are always made to feel welcome by everyone.

“It’s a great club and i am looking forward to the next two years as we look to gain promotion to the Championship.”