Flanagan aims for some happy days with Hunslet 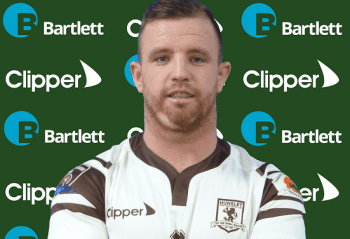 Hunslet RLFC have to aim high this year, their captain George Flanagan says.

Toronto Wolfpack are expected to power through Kingstone Press League One, but Flanagan insisted Hunslet can not settle for mid-table mediocrity. “You go into a league and you want to do the best you can,” said the hooker.

“We will see how the season goes, but we will go into it with full confidence and, hopefully, we can do well.”

Despite that, Flanagan insisted the south Leeds side will run out against Newcastle in upbeat mood. “Confidence is still high,” said the 30-year-old, who had spells with Batley Bulldogs and Dewsbury Rams before moving to Hunslet from Featherstone Rovers in 2015.

“We’ve played a few friendlies and in both the Featherstone and Leeds games I thought we were competitive.

“For large parts of the Hunslet Parkside game we were, but it just wasn’t meant to be and full credit goes to them.

“But we’ve got new systems and new partnerships and relatively a new team. It is still early days, we start against Newcastle at home and we will go all guns blazing for that.”

Sunday’s tie will be followed by a Ladbrokes Challenge Cup third round game before Hunslet – who have dropped Hawks from their name – begin their League One campaign at home to University of Gloucestershire All Golds on March 4.

Flanagan reckons the two cup matches will be ideal preparation for the real business of improving on last year’s seventh-place finish in the league, but he stressed Hunslet want to do well in both competitions.

The League One Cup culminates in a final at Blackpool, during the Championship’s Summer Bash and two victories in the Challenge Cup could earn a crack at Super League opposition and a money-spinning tie to boost the club’s finances.

“These cup games are important,” he said. “They are competitive games and after the friendly games we’v,e had, hopefully we will go into Sunday with our best 17 and, hopefully, we can do well in the cup games going into the league.”

But Flanagan admitted it will take time for Hunslet’s new-look team to gel – particularly with new half-backs in the squad – and the more games they get under their belt, the more effective they will be.

“We started pretty early, back in October and the lads have really bonded,” he said.

“We’ve got a young squad with some experience in there as well.

“The lads are together and hopefully that will do well for us going into the season.”

“Joe is a great young prospect, with a great kicking game and the more game time he gets the better he will be,” Flanagan predicted.