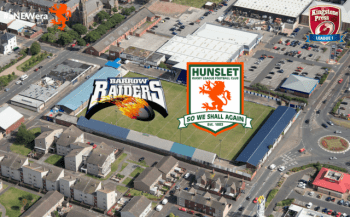 New Head Coach Gary Thornton has today named his 19 man squad for tomorrow’s trip to Craven Park as we take on Barrow Raiders in round 10 of the Kingstone Press League 1. The game kicks off at 6:30pm.

In other team news Brett Whitehead has extended his loan spell at Hemel Stags for another month and Gavin Duffy has been released by the club due to Gavin’s work commitments. The club would like to thank Gavin for his efforts and wish him luck in the future.

Hunslet RLFC can also announce that Gary Barnett (ex Bramley/Batley player) has joined as Assistant Coach to Gary Thornton, having had previous coaching experience at Huddersfield Giants. The club can also confirm that Mark Cass will remain in his role as Assistant Coach.