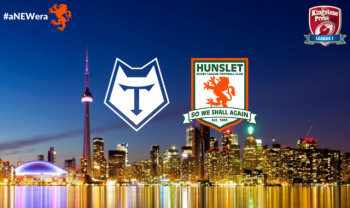 Head Coach Gary Thornton has today named his squad for our trip across the Atlantic to face Toronto Wolfpack. The game takes place this Saturday evening at the Lamport Stadium, Toronto, 7pm Kick Off.

This is the first time the teams will have faced each other since the Wolfpack joined the league at the start of this season. This is also the first time that a Hunslet team will have played a competitive match in another continent.

A number of key players will miss the trip due to various reasons. Not making the trip to Toronto are Jake Normington, Danny Ansell, Joel Gibson, Liam Mackay, Sean Hesketh, Matt Carbutt and Michael Haley.

New signings Shaun Roberts, Tommy Brierley and Luke Fowden are drafted in to the squad. Shaun Roberts looks set to make his professional debut at League 1 level with Tommy Brierley making his second trip to Toronto in as many weeks, after featuring for Coventry Bears against the Wolfpack at the Lamport Stadium 3 weeks ago.

The squad will fly out to Canada from Manchester Airport on Thursday morning returning back to Leeds via Glasgow on Sunday.

The club is expecting 60+ supporters to make the trip to Toronto to support the team, and we would like to wish all our supporters making the long trip a very safe journey. More supporter information can be found here.

For our supporters not making the trip, the game will be shown live on Premier Sports, kick off is at midnight.

We will be providing regular updates and pictures on all our social media channels over the weekend so keep an eye out.

The squad in full