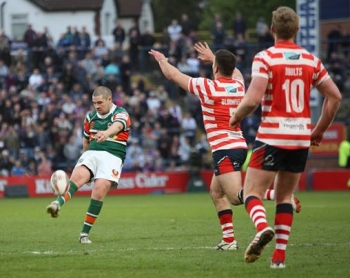 Hunslet Hawks can today announce that Thomas Coyle has signed a 12 month contract extension keeping him at the club in 2015.

Coyle was man of the match in Sunday’s nail biting showpiece and scored a crucial try in the game as well as holding his nerve to land the crucial golden point drop goal.

Director of Rugby Darren Williams said “In what is going to be a real tough challenge for the club in 2015 it was crucial we retained the services of Thomas who is a key part of our planning. He is a big game player who retains his composure under pressure. He probably had his best game to date in a Hawks shirt and what better time to perform than in a Grand Final.”

Meanwhile Williams also revealed that back row forward Brooke Broughton has also penned a deal to stay at the club for 2015.