Grimshaw returns to the club 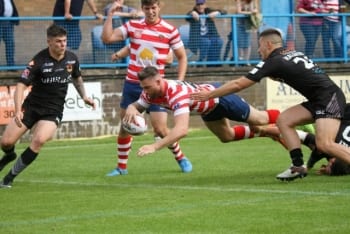 Hunslet RLFC are delighted to announce the signing of former player Danny Grimshaw from Oldham Roughyeds.

Grimmer, 31, is no stranger to the club having had two successful spells at the South Leeds Stadium following his move from York City Knights in 2010. In his first spell with the club he went on to make 51 appearances for the club scoring 24 tries as well as winning the Player of the Year at the 2011 end of season awards evening.

He then moved to Featherstone Rovers for the 2012 season before returning to South Leeds for the 2013 season. In his second spell for the club he went on to score 14 tries in 42 appearances.

He left the club in 2015, before signing for Oldham Rougheyds for the 2016 season. Danny, who has spent the majority of the 2017 season playing in the Centre, has scored 10 tries in 39 appearances for the Roughyeds.

Gary Thornton was delighted to be bringing Grimmer back to the South Leeds Stadium; “I’m delighted Danny is returning to the club for 2018.

“He is a proven, quality player who can cover a number of positions and provide some utility value.

“He’s a big powerful athlete, with great footwork, and will give us some attacking prowess wherever we use him.

“Initially I’ll be looking to use him as a strike player on the edge, but he could easily move into the middle unit if we needed him to – and be equally effective. He can also put a shot on defensively, so will be a great addition to our squad.

“He has gained some valuable experience playing at Championship level with Oldham, and he will be a major asset to us.

“He is really looking forward to returning to Hunslet, and being a big part of our ambitious plans for next season, and is the type of quality we need to get us where we need to be.”

Danny was equally excited about his move back to the South Leeds Stadium; “I’m really looking forward to returning to Hunslet.

“It’s always been where my heart is and when Gary and Daz gave me the opportunity to return I jumped at it.

“I already know how great this club and the fans are and I can’t wait to be a part of what should be a very competitive squad that Gary has put together.

“It’s going to be a really exciting season and I honestly think we’re going to be up there battling for promotion.

The club are also delighted to announce details of our season tickets for the 2018 League 1 Season.

The season ticket includes all 13 League 1 home fixtures and will be priced:

The season ticket offers great value. Buying a season ticket will save you the below against paying at the turnstile for each game.

Tickets are now on sale from the club office.