Halfback Sanderson first to commit for 2018 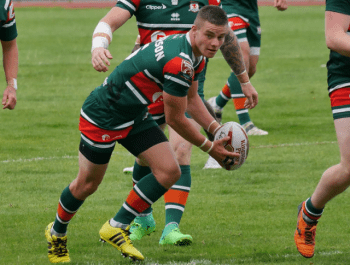 Hunslet RLFC can today announce that goal kicking halfback Joe Sanderson has signed a new contract keeping him at South Leeds for the 2018 season.

Sanderson 20 joined the club from Leeds Rhinos in November and has made 16 appearances so far in 2017 scoring 5 tries and kicked 63 goals.

Head coach Gary Thornton said “I’m delighted Joe is staying with us for another season. It’s a tough transition from Academy & U19’s football into League 1, and it can take players time to adapt to the differences.

“But Joe has made it a seamless transition, and shown real promise in his first season. His kicking game has been excellent, and he is developing his overall game at stand-off very well, and growing in confidence the more he plays.”

Thornton added “Having progressed through the junior ranks at the Rhinos, he is used to being in a really good environment, and it is important we retain this quality of player and build on our own professionalism, to help him and the other young players at the club like him to thrive with us.

Sanderson added “I’m really happy to have another year at Hunslet, hopefully we can finish this season strong and win the League 1 shield then after a short break we can get stuck into a tough pre-season and have a successful 2018 and be pushing for promotion.”

Director of Rugby Darren Williams said “Joe is the first to commit for 2018 and we will make further announcements on recruitment in due course, along with Joe we already have Jimmy Watson, Jack Lee & George Flanagan contracted to the club for 2018.”