Harvey’s hauled back to the South Leeds Stadium by the Hunslet dream! 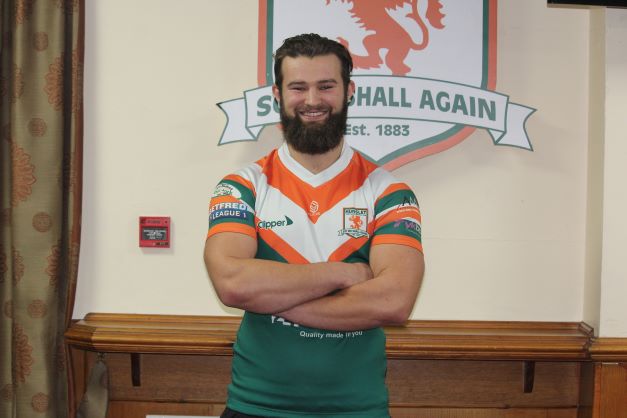 The `pull’ of Rugby League – and, in particular, of Hunslet – means that Harvey Hallas will be pounding the Betfred League 1 turf in 2022 rather than taking a sabbatical.

The barnstorming prop confided: “It’s a weird one, really. I had in my mind that I’d take a year out from professional Rugby League. There’s been so much uncertainty in the sport, with the Rugby Football League not revealing what its plans were for League 1.

“That was getting to me a bit, and on top of that I’m self-employed, as a fitness trainer. Training with a professional club three times a week, plus playing a game at the weekend, obviously impacts on my business, so I indicated to our head coach, Alan Kilshaw, that I wouldn’t be around next year. But, having reflected on it, I got to thinking that I’ve more to prove in the game, including at Hunslet, so I got back to Killer and inside three days I’d signed up on a new one-year deal.

“I’ve got to admit that, having settled my immediate future, I’m buzzing about the coming campaign. We can have a proper pre-season, spanning three or four months, this time. Last year was undermined through the Covid lockdowns, and made worse by the fact that our ground, the South Leeds Stadium, is council owned, which really limited the number of times we could use it.”

Hallas continued: “We’ve made a few good signings, with more in the pipeline, and many of them are young. Although I’ll be 24 in November, in my head I’m still an 18-year-old straight out of Wakefield Trinity Academy. The reality, though, is that I’ve been playing in League 1 for four or five years and have a fair bit of experience behind me. I’m keen to pass the benefits of that on to our younger players in the same way that lads at Hunslet did for me. They helped me buckle up, and I’m aiming to help our younger players also buckle up.

“It’s a big boost that our captain, Duane Straugheir, has re-signed. Straff has to be the best player in League 1 – he could easily play in the Championship if he wanted – and if he’s the granddad to our younger lads then maybe I’m the uncle. It can be intimidating for them coming out of Academy rugby and playing against grown men, as I know from my own experience. I can help them adapt to, and thrive, in their new environment and play my part in that way in what should be a very exciting season. And I also aim to contribute to the cause through my own game, which is centred on making the hard yards.”

Kilshaw said: “Harvey showed glimpses last season of what he can do. I have now challenged him to realise that potential, and to really develop as a player at this level and beyond.

“He has all the ingredients to be a strong middle in this league and I’m confident that with a good pre-season and extra development behind him we can see him really shining for us in 2022.”