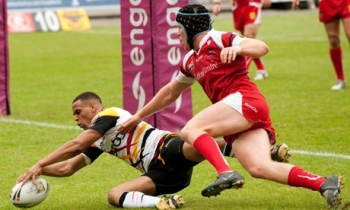 Hunslet Hawks RLFC can today announce the signing of Vinny Finigan from Batley Bulldogs on a 1 year contract. 25 year old Finigan joined the Bulldogs for 2014 after a successful 3 years at Sheffield Eagles.

Director of Rugby Darren Williams said “We needed to add some strike power out wide and Vinny brings that in abundance, he works and lives in Leeds so it’s a good fit for him and the club. He was very highly thought of at Bradford Bulls as he came up through the ranks and were pleased to add him to our Championship squad for 2015. He’s played in alot of big games at Championship level and above and that experience will be of huge benefit as we face some tough challenges next season.

On signing Finigan added “I’m delighted to sign for Hunslet, they had a great season and were rewarded for a tremendous performance in the Grand Final with promotion. I’m looking forward to working with Barry and the coaching staff and i am hoping to have a successful season.”