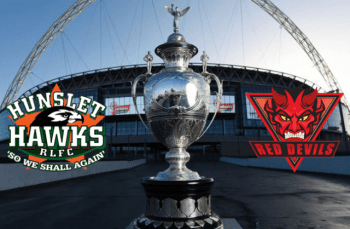 Hunslet Hawks have been drawn against Super League outfit Salford Red Devils in the 5th round of the Ladbrokes Challenge Cup.

The tie will take place at the South Leeds Stadium over the weekend of April 16-17, with one game to be televised by Sky Sports on Saturday 16 April (kick off 5pm).

The 2016 Ladbrokes Challenge Cup fifth round draw is a follows:

One fifth round game to be televised by Sky Sports on Saturday 16 April (kick off 5.00pm)

Tickets for the 2016 Ladbrokes Challenge Cup final at Wembley Stadium on Saturday August 27 cost from as little as £20 and can be purchased by calling the RFL Ticket Office on 0844 856 1113 or by visiting www.rugby-league.com/tickets