Hunslet RLFC can today announce that forward Jordan Andrade has joined the club from Dewsbury Rams for the rest of the season.

Andrade 27, a Jamaican International joined Bradford Bulls in 2018 before joining Dewsbury Rams for the current 2019 campaign.

Head Coach Gary Thornton said “I’m delighted to have Jordan on board for the rest of the season.

“He is a powerful front rower who will add some real punch up front for us and get us on the front foot.

“He isn’t available this week due to prior work commitments, but he is raring to go and to get stuck in for the back end of the season.

“He has been selected for Jamaica and is keen to show the international selectors what he can do. 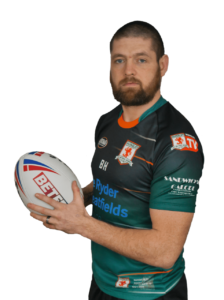 “He bolsters our pack at a vital part of the season as we approach the final few league games and potential play-off series.

“We still have hopes of finishing top, but we are dependent on other results going our way now.”

Meanwhile the club have received a huge blow with the news that strong running centre Ben Heaton has been ruled out for the rest of the season requiring an operation on a torn tendon in his thumb.

Tommy Brierley has left the club by mutual consent after a injury ravaged two years at the club as he looks for some regular game time.