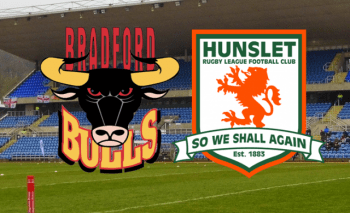 Hunslet RLFC can announce that we have entered into a dual-registration agreement for 2017 with Bradford Bulls.

Hunslet had previous dual-registration agreements in place with Leeds Rhinos & Featherstone Rovers and following a couple of meetings with officials of both clubs an agreement has been reached between both parties.

Chief Executive Martin Flynn said “Dual-registration is a hot topic of debate, we have a strong squad in place under James Coyle & Steve Deakin and although we don’t expect to use dual-registration extensively it gives us the opportunity should we wish to take it to increase our player pool at any particular time.”

Bulls Chairman Andrew Chalmers added “We are delighted to have entered into this partnership with Hunslet RLFC. Used correctly, it can be of great benefit to both parties and we are looking forward to a fruitful relationship with them.”

Players from the Championship side will be able to make temporary moves to Hunslet for extra game time.

Chalmers said: “I think that it’s a great thing for our players to still be playing the great game of rugby and not stray away from out club. Every player involved in the Bradford team is a crucial member of our plans.

“Players now have the ability to stay match fit, as well as continue to develop their skills. It will benefit the younger members of the side especially as they can pick up plenty of much needed first team experience.”

Head coach Leigh Beattie is happy with the agreement: “Besides the priceless time the players get from minutes on the field, it is also important that they continue to develop and improve.

“We know that the players that will be linked with the side are in safe hands with James Coyle. He has a great work ethic with players and they will benefit plenty from spending time with him.

“We hope to soon see Hunslet back in the Championship, there are a very tough side that belong in this league.”