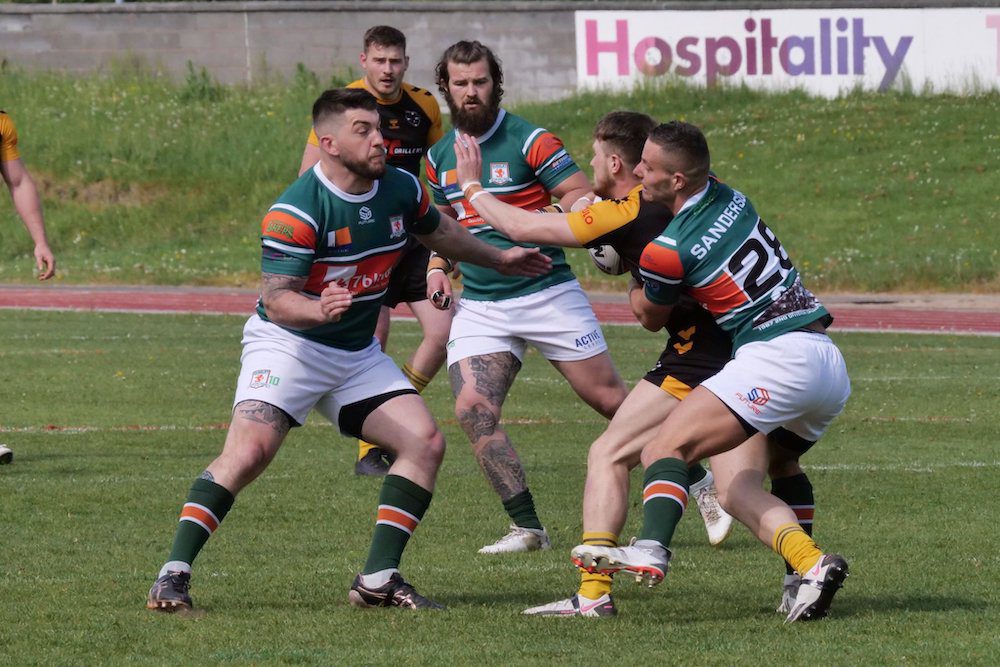 Hunslet backed up last week’s win at Midlands Hurricanes with a 52-16 mauling of the newest team in the league Cornwall at the South Leeds Stadium (8 May 2022), setting up an exciting tie next week against former Championship side Swinton Lions.

Cornwall are still to really get into their stride in their first season, and took some players on loan for Leeds Rhinos for this match. But to be fair, gave a decent account of themselves against a Hunslet side eager to start climbing the league.

Form player Wayne Reittie was straight out of the blocks with a big hit early on to unsettle Cornwall, and on 6 minutes, after Jimmy Watson had made a break, the fans’ favourite was on hand to pounce on a well-aimed grubber at the uprights. 6-0

The Parksiders were breaking the Cornish defence at will, but couldn’t finish off the moves. After a Josh Jordan-Roberts break a Cornish defender held on too long and the visitors were down to 12 men.

Although Cornwall came close to scoring it was Harvey Hallas who registered next for the hosts, stretching over so close to the posts that Joe Sanderson could throw it over for the extras. 12-0

At this point the visitors hauled themselves back into the game when Whitton went over from a neat kick. The try was converted and at the quarter stage Hunslet led 12-6.

Jordan Paga received the Man of the Match last week at Midlands and got a run out in the halfs again today. A nice break fed on-loan Jacob Doyle who rolled the ball back for Paga to pick up and score. 18-6

Hunslet came again. Olly Burton split the Cornish defence before Joe Sanderson was held up, but it was Cornwall who scored next. A clever kick was followed up by Harry Aaronson to score and with conversion Cornwall were back in the game 18-12 after 30 minutes.

Hunslet took a ten point lead into the break though, as after Cornwall were penalised for a high tackle Wayne Reittie took the touch finder before then taking the tap and taking five defenders over the line with him. 22-12 at the interval.

At the re-start the next try would be crucial. Olly Burton made another break which eventually swayed the decision on him being Man of the Match, Jason Mossop found a gap and Kieran Moran stretched over for a try which Sanderson converted to take Hunslet to 28-12.

Now sensing blood, the Parksiders gave flight to the ball. Watson and Mossop had quick hands and Wayne Reittie went over for a second of the afternoon. Joe Sanderson’s boot was good and Hunslet lead 34-12 after 50 minutes. Game over you would have thought.

Both teams had tries disallowed before on the hour mark Cornwall’s Prisk barged his way over from close in. 34-16 but from the re-start Hunslet kicked the ball dead and had another Cornish attack to repel.

This lapse in concentration will need to be cut out against stronger teams, but having said that Hunslet’s line defence was good and on 65 minutes returning captain Duane Straugheir carved open the Cornish defence before feeding Jordan Paga for his second of the afternoon. 40-16

Cornish fire now extinguished, the hosts had time to add two more tries. Joe Sanderson’s kick was miss-handled before Jacob Doyle hit the ball at pace to score, then Jimmy Watson became the third Hunslet player to score a brace as he finished off a fine move under the posts. 52-16.

Joe Sanderson had a good afternoon with the boot kicking 8 from 9, Harvey Hallas and Josh Jordan-Roberts were excellent go forward, whilst Jordan Paga had another lively game at stand off.

Two wins on the bounce makes things rosier for Hunslet boss Alan ‘Killer’ Kilshaw, but next week’s visit of pre-season favourites Swinton will be a tester. Kick off is 3pm.