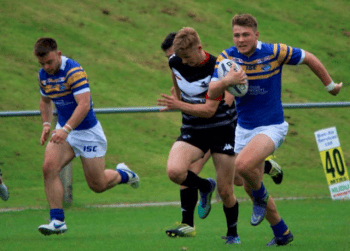 Jack 20, is a Leeds born Centre who signed for the Rhinos in 2014. The former East Leeds amateur had a spell at Salford Red Devils before joining Leeds.

Jack was named the Rhinos Under 19’s Players Player of the Season in 2015 after a standout season for the club.

Jack was impressive for the Rhinos Academy side in 2016 also, scoring 12 tries including one in the Under 19’s Academy semi final defeat against Wigan Warriors.

Jack joins former Rhinos teammates Joe Sanderson and Nyle Flynn in making the move across the city to join Hunslet.

Director of Rugby Darren Williams said “Jack has had a very consistent year in the Rhinos Under 19’s Academy.

“Once we became aware of his availability we monitored his progress as Leeds reached the Semi Final of the Playoffs.

“He is strong, direct and aggressive and is another local lad who we will look to develop further and help him reach his potential.

“He used to support the club with his father and he came through the East Leeds junior systems.”

Jack commented “I think 2017 is going to be a big year for myself and the club and i cant wait to get started.

“I’m looking forward to playing in a tough physical competition and i think Hunslet is a great club to help me with my development.”

The club can also confirm that we will face Featherstone Rovers at the Big Fellas Stadium on January 8th in the annual Gareth Swift memorial game, kick off 3pm.