Hunslet rack up the points in the heat 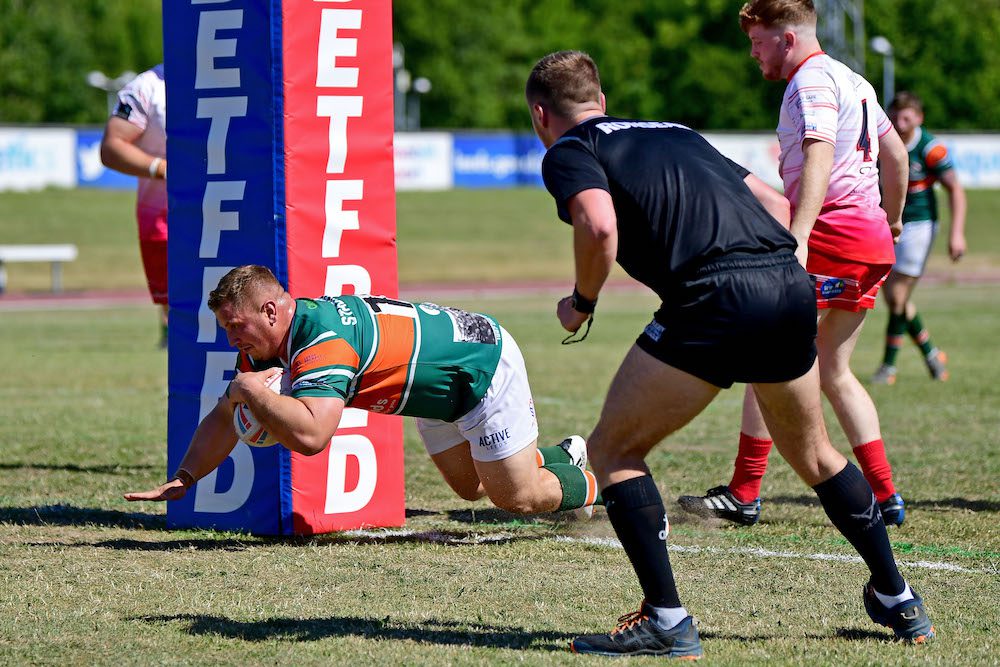 On a scorching day in South Leeds (10 July 2022) Hunslet took the 2 points against a determined and hard working West Wales side.

The Raiders have not won a game yet this season, and Hunslet didn’t want to be the first team with the stigma of a Raiders defeat, and save for 20 minutes when the Parksiders went off the boil the result never looked in doubt.

West Wales worked hard early on though, and Jimmy Watson had to read a clever kick as it bounced off the post to save Hunslet’s blushes. New Loan signing Matty Beharrell provided a touch of class for the first try on 10 minutes as his slip pass put Jordan Syme in the clear. Syme had the legs to score and although the fairly easy conversion was missed Hunslet led 4-0.

Beharrell and Syme were again providers on 16 minutes, this time sending Jimmy Watson over for a try. Beharrel converting 10-0.

For 20 minutes West Wales had been game, but now Hunslet started to have fun in the sun. Macauley Hallet made a break and good hands sent Jimmy Watson over for his second of the afternoon. 16-0

Matty Stableford notched up a brace of tries in 5 minutes. The first a simple barge from the free-kick, the second a brilliant Josh Jordan-Roberts ball near the line. Then on the hooter Olly Burton found room to dummy over and with Beharrell in good kicking form Hunslet lead at the break 34-0.

As the second half got underway the Raiders had a bit of pressure. But solid Hunslet tackling denied them a try and on 48 minutes quick work from the scrum sent Mackenzie Turner over on the left wing. 40-0

Macauley Hallett notched up a hattrick last week at Cornwall and bagged a couple more today, firstly being strong near the line and then 10 minutes later from a Jordan Paga ball. 50-0.

With three players on two tries it was a question of who’d be first to get a hattrick, but Hunslet slightly overplayed and both teams began to wilt in the heat.

Cole Oakley had a chance for Hunslet and Raiders knocked on with the line open before Macauley Hallett looked certain to score but couldn’t ground the ball.

West Wales did eventually get over the line, deservedly so with Jonathan Hutton, but Hunslet’s Jordan Paga got the last score in added time dummying his way over before Jack Render added the extras. 54-6

Resting a few names today meant Hunslet could bring on some fringe players, trying them out for the coming visit of London Skolars. Matty Beherrell on debut was outstanding and Hallett and Hird both ran strongly. But fullback Jimmy Watson won Man of the Match for his early tries and good positional play in defence.

Hunslet hope to make it three wins in a row next week at home to London Skolars on Sunday 17 July 2022, kick off 3pm.