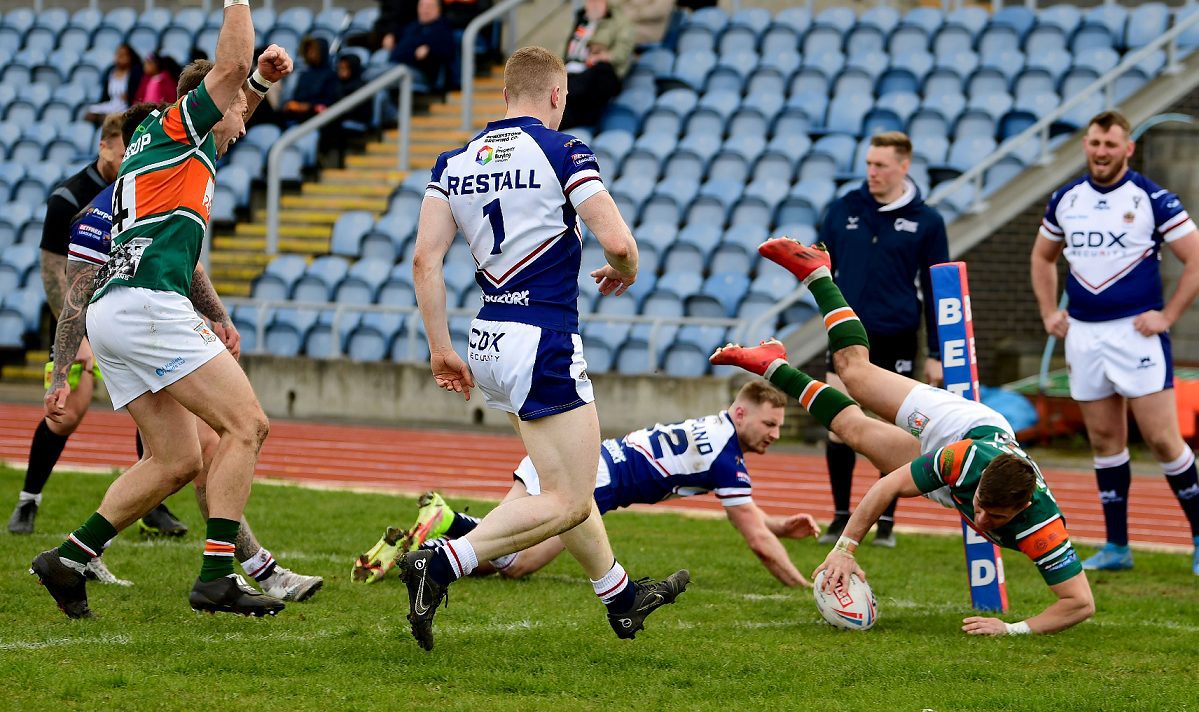 No one can say they don’t get their money’s worth at the South Leeds Stadium as Hunslet and Oldham played out a thrilling draw.

It’s hard to say whether Hunslet’s fans will be happy or sad after they saw their team come back from 4-22 down to 22-22 and with enough time to still win the game.

The club were celebrating the opening of the new ‘Geoff Gunney Stand’ named in tribute to the Hunslet legend who made 579 appearances for the club and took them from closure at Parkside out of the ashes to form the New Hunslet club.

Geoff’s old team mates in attendance and some famous dignitaries would have been pleased to see Hunslet get off to a good start, and indeed the Parksiders were on top early on and should have taken the lead. Jack Render’s break looked a certain try but the ball went to ground with the line gaping.

Hunslet were causing havoc down the right hand side with Render and Wayne Rettie (making his first start this season) finding offloads and troubling the Lancastrians.

But chances were not taken and on 18 minutes a large Oldham kick down field seemed to catch Hunslet on the wrong foot, Owen Restall won a three man race to the ball for Oldham but was held short, however hooker Bradley Jinks nipped over close in and suddenly against the run of play Oldham had the lead 0-4.

Hunslet’s luck didn’t improve when influential halfback David Gibbons was taken to hospital with a shoulder injury. Whilst Hunslet were re-organising Oldham scored again in the left corner through Owen Restall, this time Ridyard converting. 0-10

With only 5 minutes plus added time to the break the Parksiders needed to hit back, and that they did when a superb ball from Jimmy Watson sent Kiedan Hartley over in the corner. 4-10

That would have been a fair turn around for the home side who had also lost Joe Summers to a shoulder injury, but Oldham snatched a half-time try. Hunslet were penalised for obstruction at a kick and from the resulting penalty David Hewitt went over. 4-16 at the break and a mountain to climb.

Hunslet, dressed in their traditional kit of Myrtle, White and Flame started the second period well, and Ethan O’Hanlon was unlucky not to find himself in open ground, a last ditch tackle halting him. But good Hunslet pressure was eased when former Parksider Ryan Wright intercepted and brought the ball downfield.

Then a further blow when again a former Hunslet man Liam Copland followed up a kick to score an unlikely try in the corner. 4-22 and surely it was Oldham’s game to lose.

But Hunslet suddenly woke up and the pressure they had created earlier on was now turned into points. Dom Horn was strong and went over from close on 49 minutes with Jack Mallinson converting to reduce the score to 10-22.

Moments later Jack Mallinson was rushed into a kick by the oncoming Oldham defenders. But it turned into a neat chip kick and Harvey Hallas recovered the ball and made a break. Oldham were on the back foot and a smart Cam Berry cut-out ball sent Jack Render diving in the corner. 14-22

With still a quarter of the game to play the momentum was firmly with the home side, and having to defend Oldham looked tired. Jimmy Watson fielded a loose pass and as so often from broken play caused havoc. Quick passing saw Wayne Rettie force his way over in the corner and now Hunslet only trailed by 4 points. 18-22

Again the right side was fruitful for Hunslet as Jack Render fed Rettie again for another score in the corner. With the difficult kick to come the scores were locked at 22-22.

Jack Mallinson on kicking duty was unlucky that Hunslet were scoring in the corner, and with a tough breeze it made the conversions difficult. The final one going agonizingly wide.

With still 12 minutes to go though it was anyone’s game. Hunslet looked the stronger at first and came close to scoring again, before on the next set Jack Mallinson went close with Drop Goal attempt.

Oldham rallied though and themselves had two wild stabs at a one pointer, Martyn Ridyard having to deal with the wind as well as the oncoming Hunslet defence.

So on the hooter the points were shared 22-22. Hunslet will be disappointed they didn’t get the win, them being at home. But from 4-22 down after 45 minutes a draw is probably a good point.

The loss of Gibbons and Summers was a big factor, but the return of Rettie and good performances from Render, Hallas and Mallinson were a positive. They will have to tighten up fielding kicks as too many times today the ball was left to bounce on a blustery afternoon.

Hunslet travel to Rochdale Hornets next Sunday (10 April 2022) before coming back to South Leeds to play Keighley Cougars on Good Friday (15 April 2022) kick off 7:30pm.

Below photos by Stephen Gaunt / Touchlinepics.com 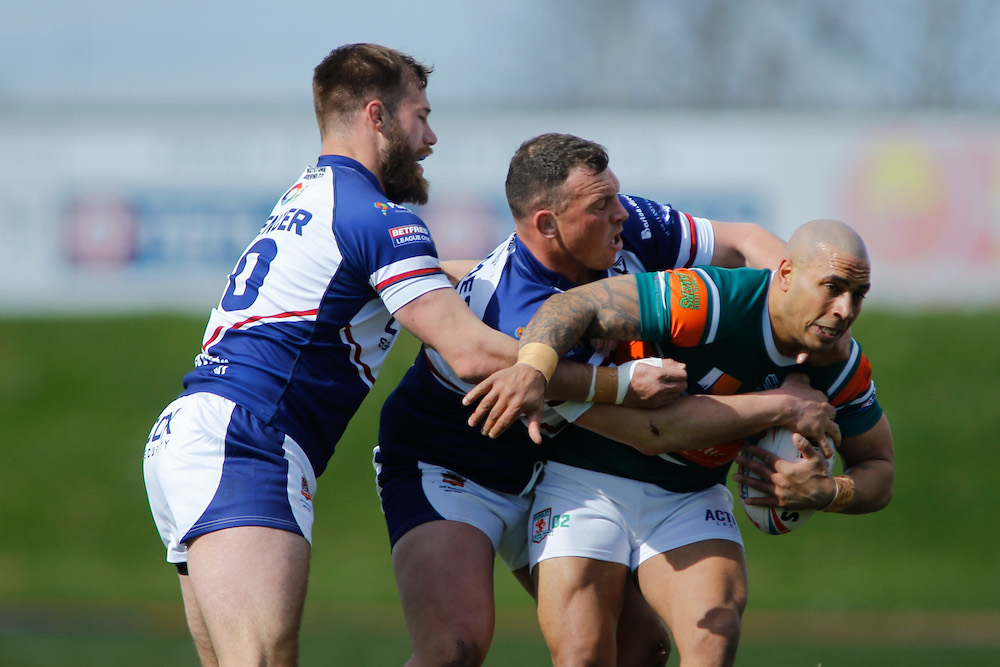 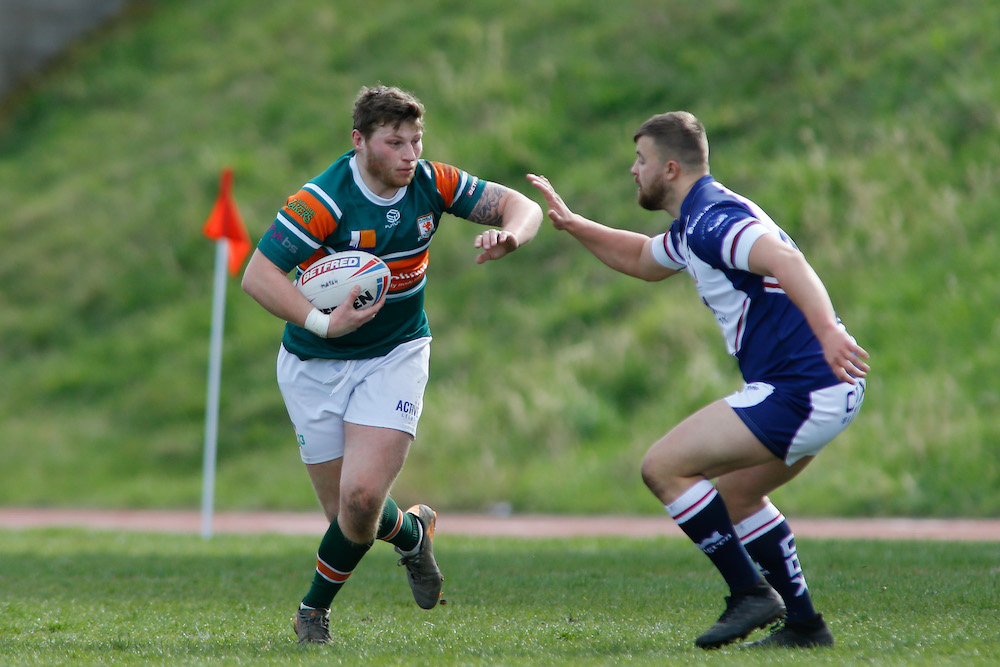 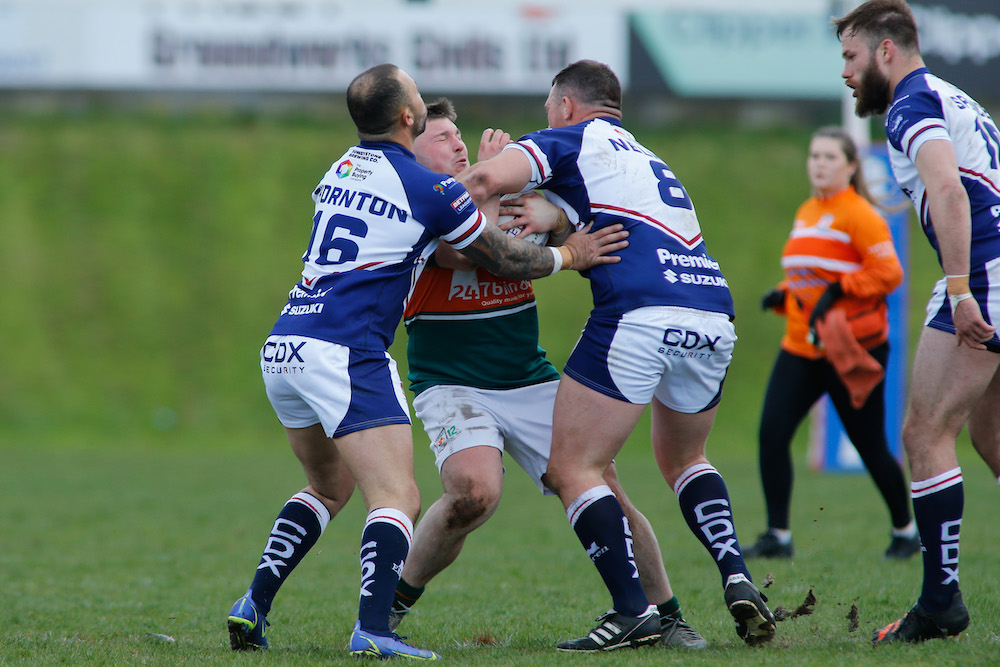 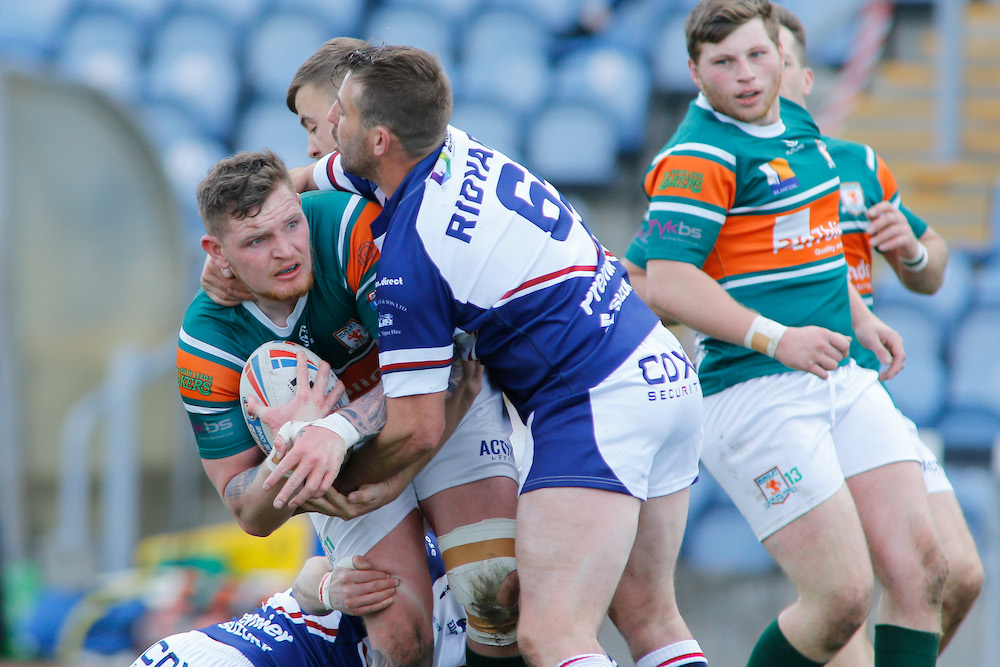 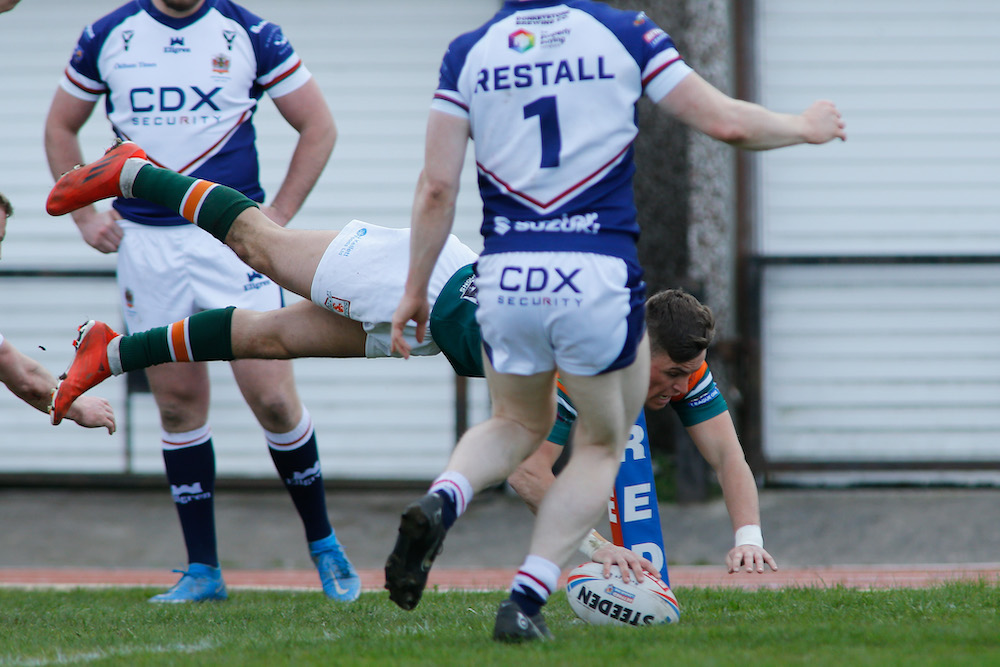 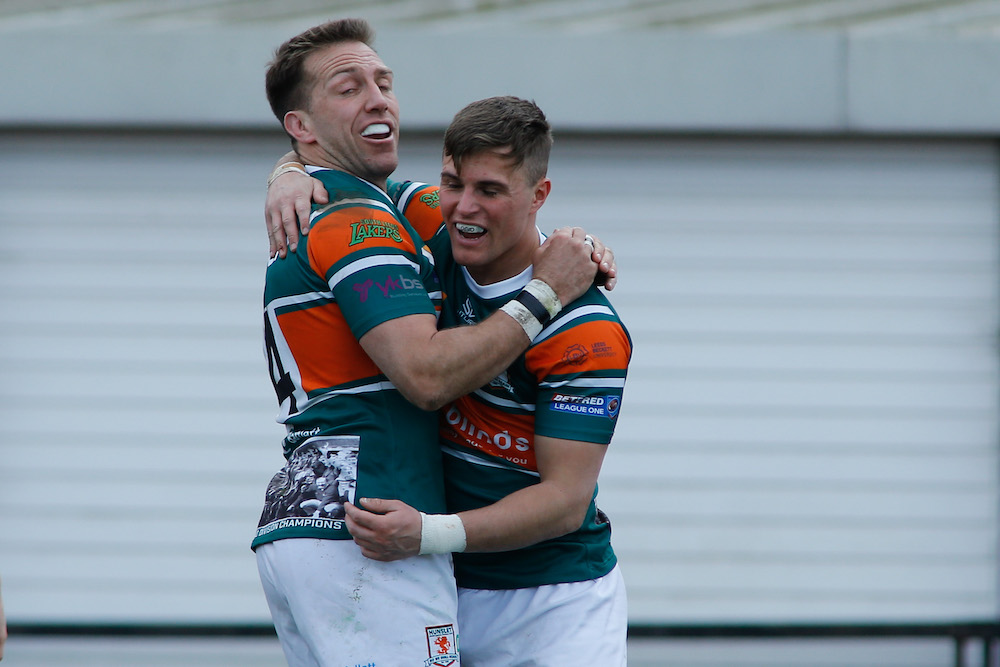 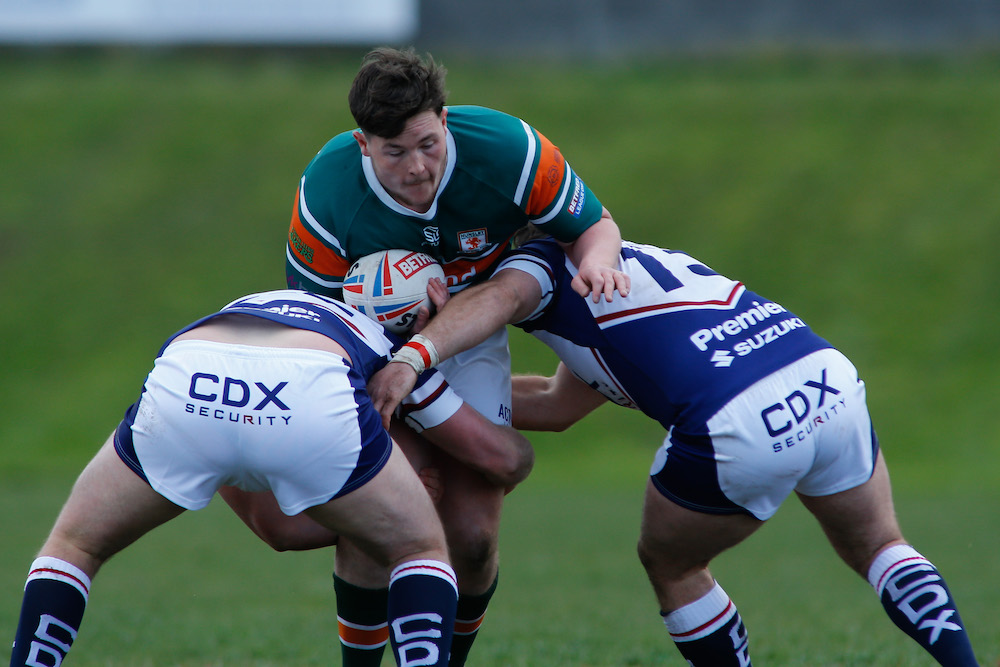