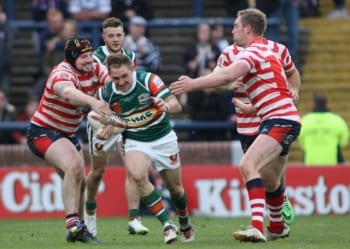 Hunslet RLFC are delighted to announce the signing of former Keighley Cougars winger Gavin Duffy on a 1 year contract.

Duffy 29 is a vastly experienced winger who is best known for his time at Keighley Cougars where he cemented his place as a regular on the wing for a number of successful years.

Gavin has also previously represented the Hunslet club, when he joined on loan during the 2014 season. He went on to play a pivotal role in helping the club to reach the Grand Final as he made 12 appearances for the club scoring 15 tries.

He was named Kingstone Press Championship One Player of the Week when he famously scored five tries in one appearance for the club against South Wales Scorpions in a 50-6 victory.

His final appearance for Hunslet was in the Grand Final itself as the club went on to lift the Kingstone Press 1 grand final winner’s trophy and gained promotion to the Championship.

Director of Rugby Darren Williams said “When Gavin joined us on loan from Keighley in 2014 he made a huge contribution in our run in the play offs and played a massive part in our Grand Final success in the dramatic Golden Point victory at Headingley Carnegie.

“He would have joined us permanently in 2015 as he enjoyed his time at the club and had settled in really well. However he was granted a testimonial by the RFL and he needed to stay at Keighley Cougars to fulfil that.

“Unfortunately he made a bad life choice and was suspended from all sport for 15 months following an anti doping rule violation. He was given a reduced suspension as he had a number of personal problems that were taken into consideration.

“His suspension expires on 19th November and he’s chomping at the bit to do what he does best and that’s play Rugby League.

“Having spoken to Gavin about the expectations the club have, we are sure the environment & the culture we are creating at Hunslet will be a good fit for Gavin as he looks to get his life back on track and move forward onto a new chapter with us.”

Duffy added “After having a bit of time out from playing Rugby League it has made me realise just how much love I have for the game.

“I’m so excited for the next chapter of my career. I’m really looking forward to working with a young and upcoming coach in James Coyle.

“I’ve had the pleasure with playing with James when I was at Hunslet on loan in 2014 and he is a great guy. James knows the game inside out and I feel like I can bring a lot of experience to the team.

“I want to be playing at the top of my game so I’m working very hard in the gym, training five times week to get where I need to be and ready for pre-season training which starts soon.”