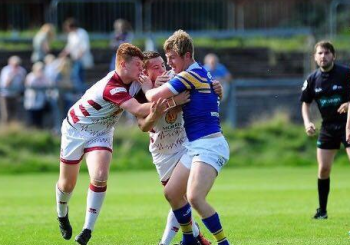 Nyle 19, is a Dewsbury born Prop Forward who signed for the Rhinos in 2012. The former Dewsbury Celtic amateur who can also play in the Second Row, had a spell at Huddersfield Giants before joining Leeds.

Nyle cemented his place in the Rhinos Academy side in 2016 making a number of solid appearances for the club as they reached the Under 19’s Academy semi final where they eventually lost to Wigan Warriors.

Director of Rugby Darren Williams said “Nyle has had a very consistent season with the Rhinos 19’s. He’s played a lot of minutes for a middle unit and all the feedback we’ve had on him is that he’s a great kid with a superb attitude who just wants to continue to learn and improve.

“2017 is going to be a big season for him in terms of his development as he will be competing against some seasoned performers.

“He’s just the type of player we are looking to bring to the club, he ticks all the boxes, he has good attributes and has age on his side to develop under James and Steve.”

Nyle commented “I am really pleased to have signed for Hunslet. I’m looking forward to getting a good pre-season under my belt, so I am ready for a big season ahead.

“It will be an exciting new challenge for me stepping up from the academy to play first team rugby, but I’m hoping for a good season and getting plenty of game time for the club.”