Hunslet to face Newcastle Thunder in League 1 Cup first round 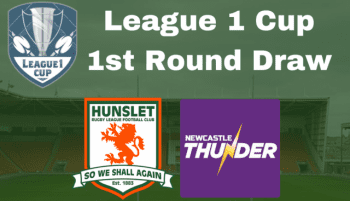 The draw for the first round of the 2017 League 1 Cup took place last night live on BBC Radio Leeds.

Hunslet RLFC will face Newcastle Thunder in the first round of the League 1 Cup at the South Leeds Stadium on Sunday 19th February, Kick off 3pm.

The draw in full is as follows:

Pool B (midlands and southern regions):