Hunslet’s poor home form this season continued as Workington Town took the points and inflicted a third defeat on the South Leeds outfit this campaign.

The Cumbrians always looked the hungrier as they needed the win to secure a play-off place (Hunslet are already guaranteed a 4th or 5th place finish), and the home side had a raft of injuries and suspended players. But still with no home wins against the top six sides the Parksiders are left to rue their home form this year.

Workington opened the scoring on 7 minutes when a simple mid field break lead to an O’Donnell try. 0-6 to the visitors. They doubled that on 23 minutes when giant Tongan born and former Kiwi Fui Fui Moi-Moi barged through the Hunslet defence. 0-12. 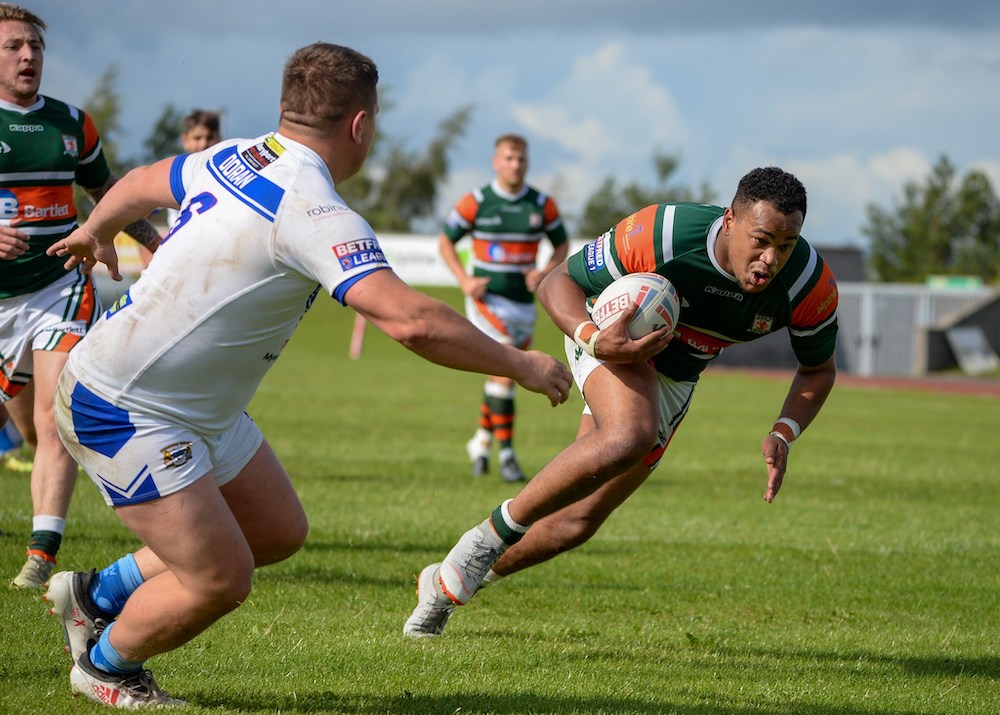 Although Hunslet had had an effort by Aidan Hema disallowed for a double movement it wasn’t until 29 minutes that the Parksiders registered a score when Duane Straugheir powered over with three men left in his wake.

Hunslet now had a period on top. Sanderson’s conversion had made it 6-12 and that looked to be it for the half. Jimmy Watson stopped a certain try with a brilliant tackle, before Ryan Wrights smart pass sent the ever strong running Charlie Martin in on the hooter. 12-12 at the break.

Hunslet would feel fortunate to be all square at the break, not being on their best form, but yet again fell asleep as the second period began.

Moi-Moi again proved too strong near the line and the Cumbrians lead 12-18 on only 41 minutes. This seemed to wake Hunslet up and from the kick off their strong defence managed to force a drop-out. A delayed Joe Sanderson ball in the ensuing play sent Vila Halafihi into a gap, who finished off the try well.

Uncharacteristically, and probably typical of Hunslet’s luck Sanderson missed the easy conversion to leave it 16-18 to the visitors.

More injury woes hit Hunslet as strong running forward Adam Robinson came off with a suspected broken wrist and talismanic kicker Simon Brown limped off, but now the home side pressed for the win. After a Nathan Chappell break lively hooker Ryan Wright was unlucky from a kick and Chappell himself had a try disallowed for a pull-back on a defender.

Chappell though reacted angrily and saw himself given ten minutes in the sin-bin to cool off. Town took advantage of the numbers and from a slightly dodgy pass Tom Curwen scored under the posts which with the conversion stretched the lead to 16-24.

With only ten minutes left and two scores adrift Hunslet had to throw caution to the wind and Charlie Martin was unlucky to have a try disallowed after being offside from the kick.

Almost immediately Perry Singleton romped down the left to seal Workington’s win after a reverse ball sent him clear, the visitors lead now unassailable at 16-30.

Hunslet’s day was perhaps summed up in the dying moments as Tom Ashton broke through only for the ball to fly out of his grip.

Man of the Match Vila Halafihi and the lively Wright and Martin were the best for Hunslet, but with only one remaining home game left (next Sunday v Oldham) the Parksiders will have to find form if they are to get promotion through the play-offs this season.

Returning players may make a difference but with a trip to Newcastle on the cards, Hunslet will be glad that their away form is one of the best in the league.