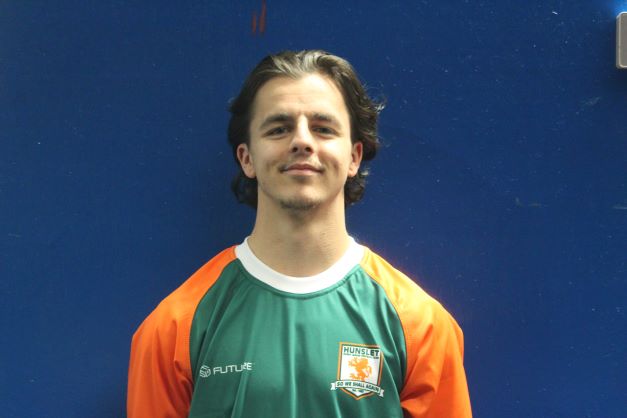 Ieuan Fairclough is, by profession, a personal trainer and conditioning coach who, with a strong background as a player in both Rugby League and Rugby Union, brings an empathetic understanding to his work with Hunslet’s new-look squad.

Morley lad Fairclough, 21, is back to his roots with the Maroons after having played League in Newcastle, New South Wales, from the age of eight to 18 after his family emigrated to Australia.

A high-scoring winger, albeit currently sidelined with a fractured femur, Ieuan perhaps wasn’t all that too far off playing for Hunslet, either. As he explains: “I went down to the South Leeds Stadium earlier last year, partly with trials in mind but perhaps mainly with an eye on working for the club in strength and conditioning.

“Hunslet’s then-coach, Gary Thornton, was very welcoming and, while indicating that he couldn’t offer me a place in his squad, kindly asked me to hang around with a view to helping out, alongside Steve Morton, with fitness work.

“That was too good an offer to turn down – I was happy to look at the longer-term picture – and details were subsequently firmed up in conversations with General Manager Chris Chatten.”

Ieuan bedded in nicely and, having proved his worth, continued in the same vein following Thornton’s departure in the summer and the appointment in his place of Alan Kilshaw.

He says: “GT had been giving me more and more responsibility and Killer quickly reaffirmed that, asking me to write up programmes for his new-look squad.

“I was delighted to do so, and things are going really well in training. It’s interesting dealing with mainly young players (some of whom are younger that I am!) alongside older ones. I have to factor in such as age differences, pre-existing injuries and, of course, playing positions when mapping out individual programmes, all of which helps make it a very absorbing role for me. And what makes it even more rewarding is that the lads are very proactive, coming to me with supportive ideas of their own. With that approach, together with the fact that so many of our players are very young, we will be as fit as any team in Betfred League 1 – fitter in fact. The new season should be an exciting one.”

Kilshaw said: “Ieuan has been really impressive in the short time I have been at the club. He is thorough in his planning and detail and I feel he has a big future in the game, or in professional sport as a whole, as a Strength and Conditioning coach.

“He is a student of sports science and performance and he and Steve Morton really complement each other and work well together. I’m sure their combined methods will have positive results in 2022.”