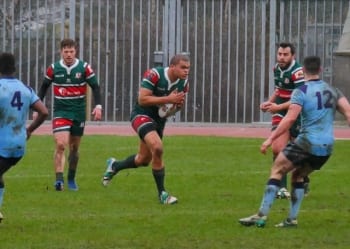 Head Coach James Coyle has paid tribute to his middle men for their big effort in the opening 10-6 Kingstone Press League One win over University of Gloucestershire All Golds.

Nyle Flynn, who had been due to start at prop, was taken ill on the morning of the game and Hunslet had already lost Michael Haley due to a hamstring injury.

Matt Carbutt stepped into the front row alongside debutant Trea O’Sullivan, who is on loan from Batley Bulldogs, and 18th man Brett Whitehead was drafted on to the bench.

Lewis Reed and Jack Coventry were also unavailable and Coyle said: “It was a good effort, in those conditions and with our bigger middles unavailable.”

Captain and hooker George Flanagan was left out for the second successive week. He was one of the players dropped after Hunslet’s 34-10 home loss to Newcastle Thunder in the League One Cup and Coyle said: “We have put a lot of accountability on the players and when people are not perfoprming they are not going to get selected.

“It shows how well people have been performing in training and in the last game [a 34-0 Ladbrokes Challenge Cup win over Coventry Bears] that they are managing to keep out the captain.

“We are looking at seeing how he goes this week and maybe bringing him in for Sunday’s game at Hemel.”