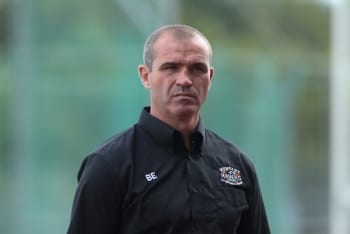 Injuries and a series of narrow defeats have cost Hunslet Hawks a place in the Kingstone Press Championship next year, coach Barry Eaton says.

Barring a mathematical miracle, Hawks will be relegated after just one season in the Championship, despite a respectable eight wins.

“I am not using injuries to key players as an excuse, but it’s a reality,” Eaton said. “We can’t replace like for like with key players. Workington signed Jarrod Sammut just before the deadline and what a difference he has made to them.

“Whitehaven have been able to keep their Widnes players for the duration of the season and they make a big difference to them. Injuries have made it tough and also, at the start of the year, we were close enough to pick up another four or five wins. Overall, it has not been drastic, that’s for sure, but it has been down to fine margins.”

He said: “Danny has had an injury-plagued two or three years.

“He had a spell away from the club and came back in a fantastic frame of mind and good shape.

“But he’s had one injury after another, so he’s not been able to string games or performances together.”