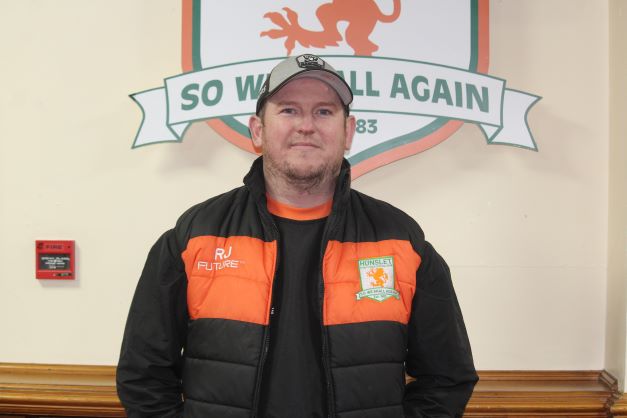 RYAN JACKSON, who is nicely bedded in as Hunslet’s assistant coach after having joined the Parksiders last year when the long-serving Mark Cass signalled his impending retirement, is – like everyone else at the South Leeds Stadium – looking forward to the 2022 Betfred League 1 campaign with keen anticipation.

`Jacko’ says: “We’re into our fourth week or so of pre-season training and I’m enjoying working with everyone in our revamped squad.

“There’s no reason why we shouldn’t be as good as any team in the competition, and better than most. It’s a very even league, it looks like the chase for promotion could be wide open, and I’m enjoying playing my part in our challenge.

“Our head coach Alan Kilshaw is great to work with, which is important. Killer’s always ready to ask my opinions and we’ve been working well together since he was appointed last summer.”

‘Jacko’, 33, was involved at local amateur outfit Drighlington for many years, for well over two decades in fact, since he was an innocent eleven-year-old, having previously played for East Leeds before the family moved home.

His best memory with Drig is winning the BARLA Yorkshire Cup in 2014 when Queens were beaten at the South Leeds Stadium; Methley Royals, with whom Hunslet’s press officer Phil Hodgson was involved, had been edged 18-17 in a dramatic semi-final. And another golden moment was the Challenge Cup match against Dewsbury in 2010, when the Rams were pushed hard. “That was a very good Drighlington side,” he reflects. “Several of the lads had the chance to turn pro but opted to remain with their mates and battle for major amateur honours, such as the Yorkshire Cup.”

Jacko cut his coaching teeth at Drighlington, starting at junior level and gravitating to Open Age, where he assisted Dave Tomlinson with the `A’ team. “Dave’s a really good coach and his philosophy is that the players should, above all, enjoy themselves; that’s a big thing I learned from him,” says Jacko, who adds “I was then asked to join Hunslet by the Parksiders’ then-coach Gary Thornton, who told me he needed an assistant.

“I’ve known GT for a long time, from when he coached me as a 13-year-old. We’d got chatting at a charity cricket match between the Drighlington cricket and rugby teams, which had been arranged following the tragic death of one of our players, Jensen Okhovat. I owe a massive `thank you’ to GT, he gave me the opportunity at this level and I was sorry to see him leave the club. And I also owe a debt to Alan Kilshaw, who was recruited in GT’s place and who has made a big impression, including in getting on early and quickly with the job of recruiting what looks like being a very competitive squad for next season, with several old heads and a host of young lads on board.”

Jacko, who still watches Drighlington whenever he can and who takes particular interest in how his son is progressing in the Under 7s, says: “I’m enjoying working with Killer. The role of assistant coach is an interesting one, in some ways you can be a conduit between the players and the head coach, it’s an important position and one I relish.”

That’s a stance echoed by Mark Cass, whose retirement had been `on hold’ for several months until he had no alternative other than to focus on work and family commitments last summer. Cassy said at the time: “It’s been a privilege to serve this great club for so long, including as head coach for a spell a little over a decade ago. I’d planned to step back at the end of the 2020 season, which was aborted early on through the Covid-19 lockdowns, but stayed on for a while to help out through the welcome but procedurally difficult period for all Rugby League clubs, when restrictions were eased.

“Work pressures, though, made combining all my roles increasingly difficult, especially as I work nights. But I wish `Killer’ and the lads all the best and I’m sure they’ll do very well next season.”

Hunslet’s impressive backroom staff now comprises Kilshaw and Jackson, together with strength and conditioning coaches Steve Morton (the former Queens ace has been in post for several years) and Ieuan Fairclough, while Ellie France has joined the Parksiders as physio.

Club stalwart Scott Johnson, meanwhile, has added the role of kit manager to his duties as match video analyst, while Amanda Binns has been appointed as Club Welfare Officer.

Kilshaw said: “I’m very happy to have such quality people off the field this season. The `team behind the team’ has a huge impact on how the side performs week in week out at clubs such as ours, and they are doing it for very little if no financial reward, contributing many hours to helping make the players and the team better.

“We have a great crew in place and we’re now well into pre-season, with everything working very well and cohesively.”