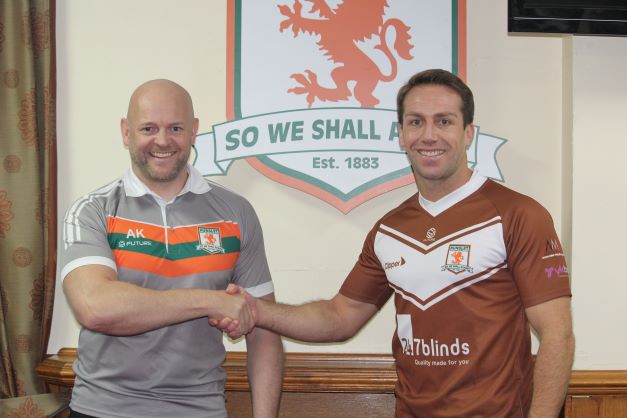 EXPERIENCED Cumbrian centre Jason Mossop doesn’t mind admitting that a key reason for his joining Hunslet is the opportunity to nurture the many young players being signed by the Parksiders’ very active head coach Alan Kilshaw – and, not least, the chance to learn in return.

Mossop, 35, who has switched from Whitehaven on a one-year deal, said: “I’m looking forward, as a player with around 15 years’ experience in the Championship, to helping bring the youngsters along – and I’m also keenly anticipating picking things up from them, as you’re never too old to learn.

“It’ll be a new ball game for the lads who are stepping up to Betfred League 1 from the Academy and playing against grown men for the first time. As one of the more experienced players in the squad I’ll be able to play a big part in their development, on and off the field.”

Mossop has, in that sense, come full circle. He said: “I came through the system at Hensingham, one of the top amateur clubs in Whitehaven, and my mentor was my father, Tony, who coached me there. He was very honest with me, and helped me mature as a fast young player, ensuring that I kept my feet on the ground.

“I was signed by Castleford Academy when I was 17 after Cas coach Dean Sampson – a former Hunslet player of course – spotted me and signed me. I scored a hat-trick on my debut and we had a memorable Grand Final win over St Helens. I learned a lot from Diesel, who was very enthusiastic, and I also picked up handy experience in loan spells at Doncaster and Batley.”

Mossop attended Leeds Met University and after having lost on his own admission some interest in Rugby League, played for their all-conquering Student League side under the renowned Paul Fletcher.

“Fletch reignited my passion for the game,” says Jason, “he was a wonderful coach who had many qualities, one of which was that he got players wanting to perform for him.

“Another man I enjoyed playing under was Great Britain Students boss Clive Griffiths. The former Welsh international was the most knowledgeable coach I’ve ever come across, League or union. As a young player I didn’t maybe appreciate that at the time, but I’ve grown to properly realise it since; I’ve a vivid memory of Sean Edwards coming along once and saying that Griff taught him everything he knew about the game, which tells you a lot.”

His student days over, Jason signed for Workington Town and enjoyed ten happy years, and a benefit, at Derwent Park before moving on to Whitehaven for the last three or four seasons.

He says: “My wife is from Wortley and for family reasons (we’ve a two-year-old, and another on the way in December) we’ve moved to Yorkshire from West Cumbria. My employers – I’m a nuclear advisor – have been very good about me relocating, so I’m able to work in Leeds and get back to the north west maybe once a week.

“So Hunslet fits the bill perfectly for me. I was impressed when I spoke to Alan Kilshaw by his philosophy, and how he’s rebuilding for next season and beyond with a young team sprinkled with experienced players.

“We’re aiming to have a good start to the season. The minimum goal, I think, should be for us to reach the play-offs and, subject to us doing that, take it from there.”

KIlshaw said: “This is a real coup for the club; we have recruited an outstanding player who had been a consistent performer at Championship level.”

He added: “We are also getting an ultimate professional and someone who will no doubt set a great example for some of the younger lads in the group. Jason has shown huge commitment in coming to us when other offers were more attractive financially. He has bought into the ethos of what we’re trying to implement at Hunslet and he is another locally based player for our supporters to get behind.”