Keighley too hot for Hunslet 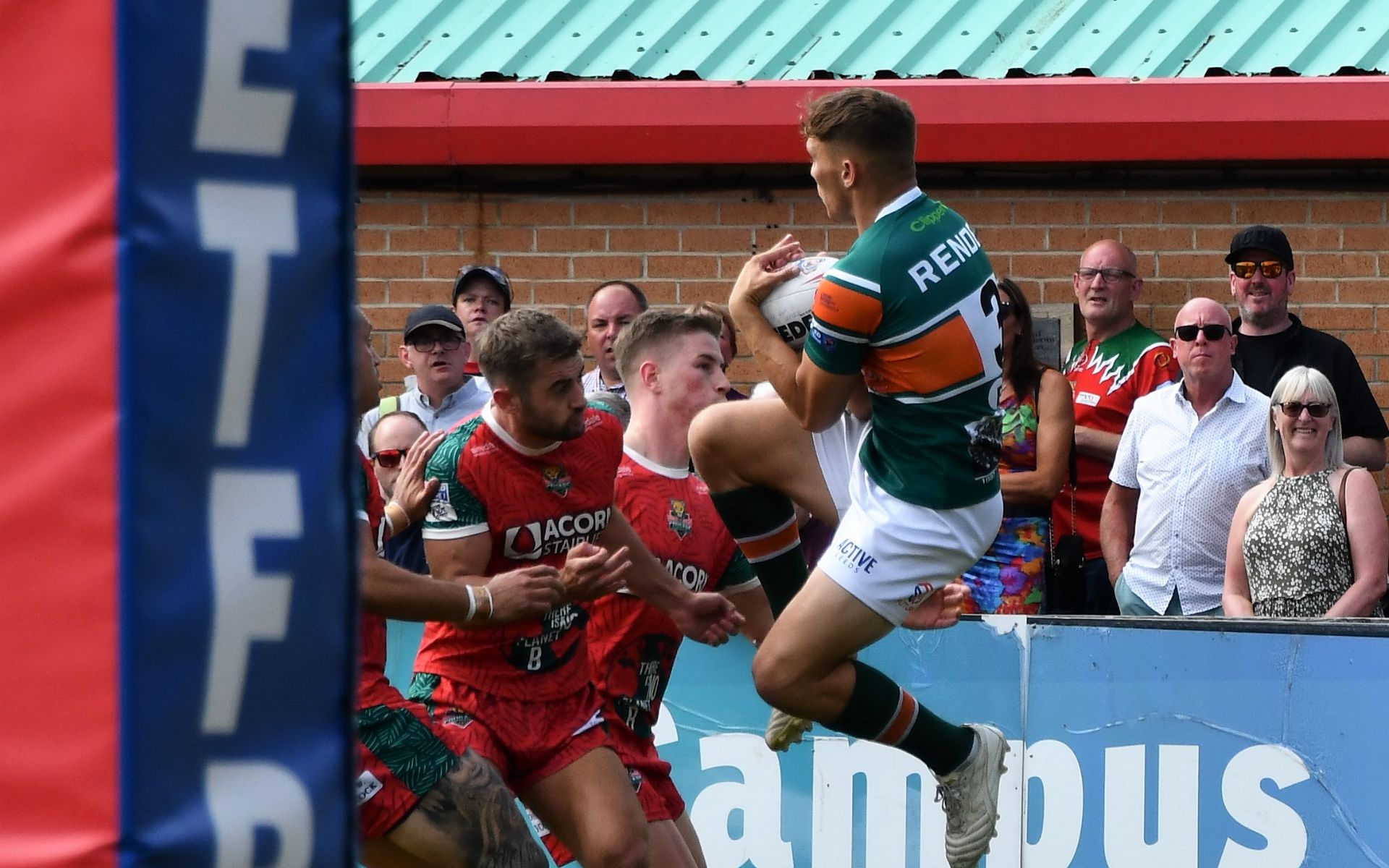 Hunslet had a tough day toiling in the heat at league leaders Keighley Cougars (14 August 2022) as the only team unbeaten in League One showed why they are almost certain of automatic promotion.

The Parksiders had taken them close earlier in the season losing to a last minute controversial try, and indeed had been the only team to inflict a defeat on Keighley in the early rounds of the Challenge Cup, but since then the Cougars have strengthened and have become almost unbeatable.

For Hunslet a few returning players meant a chance to redeem some pride after the disappointment of a 0-24 home defeat to Midlands Hurricanes.

The game started evenly with both teams giving flight to the ball, but after the first mistake (a Hunslet knock-on) Jack Miller stepped inside the Hunslet defence to score. 0-6

Fourteen minutes in and Keighley scored again, it was former Hunslet man and the scorer of that early season heartbreaker Mo Agoro who, after quick hands, was too strong for Hunslet in the right corner. 12-0

There had seemed nothing between the teams, but two mistakes had cost Hunslet dearly, and the quality in the Cougars ranks had taken full advantage.

A quarter way through the game and Hunslet showed some fight. Beharrell had gone close before, on 22 minutes, Harvey Hallas powered over after good work by Whiteley and Beharrell. 12-6

Patrick Walker returning from injury was giving flight to the ball and Hunslet looked as if they may get back on level terms, but a kick through knocked into touch was deemed to have played the man rather than the ball and Hunslet’s attacking momentum was thwarted.

The game turned though on 33 minutes when Matty Beharrell was sin-binned for holding down leaving Hunslet to play out the half with only 12 men.

Keighley took full advantage as Matthew Bailey went over near the posts, Alix Stephenson juggled the ball and scored after quick passing and Billy Gaylor nicked a try from acting Half-back, all converted by Jack Miller to give Keighley a 30-6 half time lead.

The second half started much the same as good hands again sent Stephenson in the corner, and by the time Beharrell had come back on Hunslet had gone from trailing 12-6 to trailing 36-6.

Now Keighley looked to run up a big score as first Junior Sa’u then Charlie Graham added tries before Alix Stephenson completed a hat trick in the left corner. 54-6 and still 20 minutes to play.

Criticism of Hunslet this season has been that they are inconsistent. This is possibly to be expected of a young developing team and this game highlighted the problem. The middle 20 minutes of the first half had been good and now they started to show a bit of fight again.

Jordan Paga had gone close with a neat chip kick, before a Patrick Walker pass sent Macauley Hallett over on 66 minutes. Paga nicked a try himself moments later with Walker adding the extras. 54-18

This may have been helped by Cougars’ Dane Chisholm being sin-binned, but Hunslet were finishing strongly until James Feather rounded a tired defence to complete the Cougars win with Miller converting, 10/10 for the afternoon.

It’s no disgrace to lose against Keighley this season, but Hunslet need to find a win from somewhere to be guaranteed a play-off place and with games against Swinton, Doncaster and Oldham to come it may go down to the wire.

Reittie ran strongly and O’Hanlon is a handful but it was Jack Render who was awarded the Hunslet Parkside Ex-players Association Man of the Match voted for by his team mates. Hunslet travel to Swinton next Sunday.