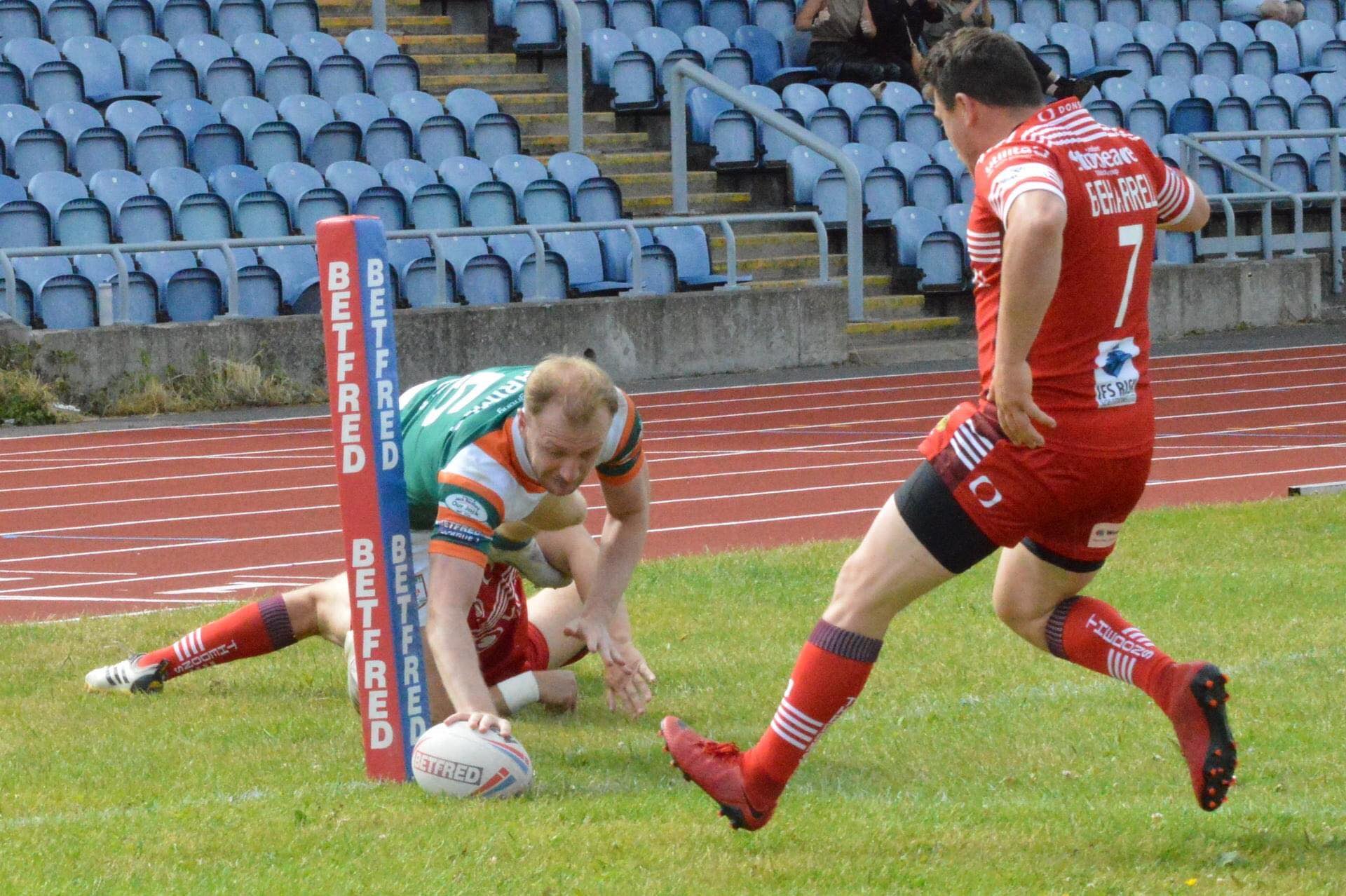 Hunslet and Doncaster fought out an entertaining draw at the South Leeds Stadium yesterday (20 June 2021), but the Parksiders will rue the chance to make it 3 wins on the bounce as the visitors’ Matthew Beherrell danced his way through the Hunslet defence in the 80th minute to earn the visitors a point.

There wasn’t much between the teams, and for the second time this season (the other occasion away at Keighley) Hunslet turned round at the break with the score 0-0. On that occasion Hunslet slumped to a 40-0 defeat, but that was never going to happen today.

The Parksiders had the best of the first half, more or less camped in Doncaster’s final quarter for a good half hour, but too often handling errors let the visitors off.

The left three-quarter partnership of Tom Ashton and Alex Brown looked especially dangerous and on two occasions Brown had tries disallowed for brushing the touchline. On another occasion Brown, close to scoring, was hauled over the dead ball line by a pack of Dons defenders.

The only chance for Doncaster came after Hunslet spilled the ball under their posts, the resulting set ended in broken play as the ball went to ground, the ref waved play on and Doncaster hacked the ball forward. Quick thinking Captain Duane Straugheir knocked the ball dead to keep Hunslet’s line safe.

So stalemate at the break and all to play for in the second period.

It was Doncaster who came out the more lively though and on 50 minutes they opened the scoring when Benjamin Johnson stretched over from close in, Beherrell adding the extras 0-6.

This seemed to spark the home side and especially on-loan half back David Gibbons. Gibbons took on the Dons line after Duane Straugheir had breached their defence, great handling sent Matt Chrimes over with a spectacular dive in the right corner. Gibbons conversion hit the upright, a miss Hunslet would rue later.

Too often though the Parksiders go to sleep defensively and on 60 minutes Doncaster’s half-back Johnson made a break and sent Aaron York over for a try, 4-12 and work to do for Hunslet.

Hunslet are at their best though when forwards Alex Rowe and Zach Braham are on the field, they are a real handful for any defence, but it was lively new signing Mikey Wood (from Newcastle) who registered next for Hunslet, after a neat ball from Conroy sent him over by the posts. 10-12

Hunslet now smelt blood and on 73 minutes scored the try of the game as a rampaging Duane Straugheir broke through three or four tackles to feed the supporting Gibbons who sped under the posts to the delight of the home faithful. 16-12.

Things went from bad to worse for Doncaster when Ross Peltier was sin-binned for a late tackle and David Gibbons stretched Hunslet’s lead to 6 points 18-12, but with seconds to play the Referee handed the ball to Doncaster for a Hunslet infringement and Beherrell weaved his magic through the home defence.

Hunslet would be aggrieved to have let their lead slip on virtually the last play, but happy that their unbeaten streak continues. Games coming up away to West Wales and Coventry are winnable which would lift them up the table.

On-loan fullback Lewis Young seemed to settle in well and Gibbons looks a real prospect. Hunslet’s forwards quite often get on top, but Coach Gary Thornton will be wanting them to take advantage in these moments, especially with that impressive looking three-quarter line-up.