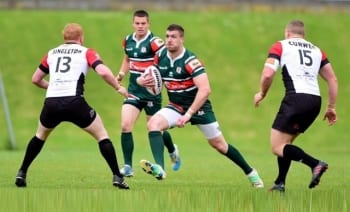 Hunslet RLFC can today announce that prop forward Lewis Reed has signed a 12-month contract extension with the club keeping him at the South Leeds Stadium for the 2018 season.

Reed signed from Keighley Cougars in 2013 and has matured and improved year on year and has now cemented his place as a regular in the team. Reed has made 15 appearances so far in 2017 scoring 1 try.

Head Coach Gary Thornton said “Lewis has been one of our most consistent performers since I arrived at the club, and a cornerstone of our pack.

“He’s still relatively young for a front rower, but he has played regular 1st team football for a number of seasons now, so has built up some good experience.

“He has a terrific attitude to training and playing, and has worked hard on improving his fitness after an injury hit start to the season, he has put in some solid performances against some of the bigger clubs in the division.

“He was outstanding at Toronto and really stood up to their pack, and is well respected by his peers.

“He’s a big, strong front rower, and takes some holding going forward, and is developing an off load game too.

“I’m delighted he has re-signed, and look forward to seeing him develop into one of the top front rowers in the division in seasons to come with Hunslet.”

Reed added “I’m really pleased to have signed another 12-month extension at Hunslet.

“I have been here a few years now and I love playing for this club.

“I’m looking forward to finishing this year on a high and then having a big pre-season and hopefully making 2018 a lot more enjoyable for our loyal fans and challenge for promotion.”