Lions’ Championship experience too much for Hunslet 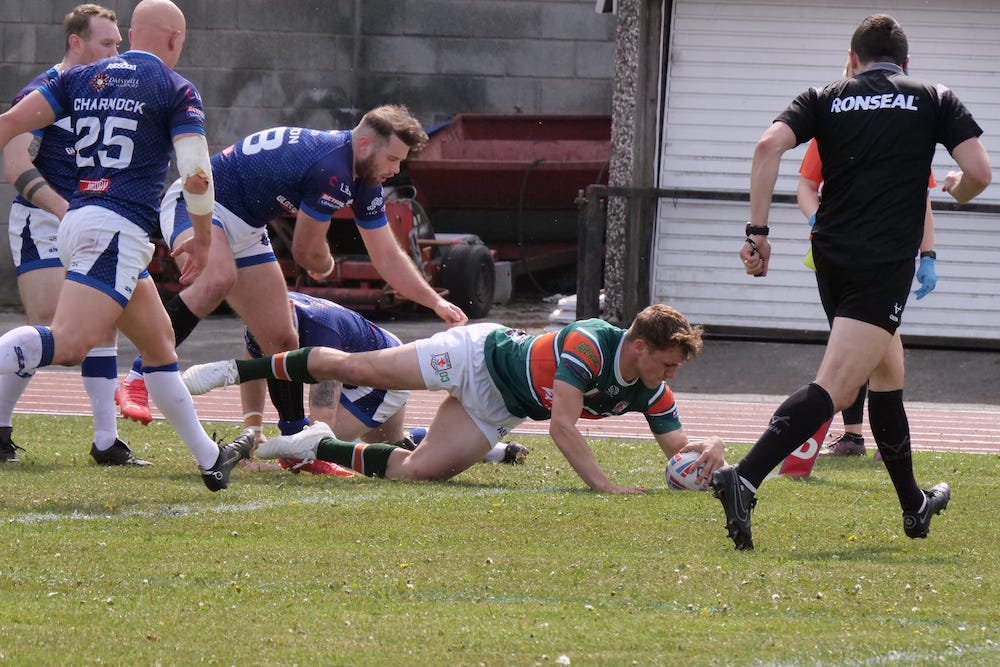 Swinton Lions took the two points in Sundays Betfred League One clash at the South Leeds Stadium (15 May 2022) reinforcing their credentials as joint title favourites.

In the two teams’ first meeting in nine years the former Championship side (who only sat a place above Hunslet at the start of play) hit Hunslet either side of the break to put the task a little beyond the Parksiders.

Hunslet (missing Centre Jason Mossop and in-form forward Ethan O’Hanlon) took the game to the visitors early on and took the lead on the 11th minute when after quick passing Jimmy Watson sent Jack Render over in the corner. Joe Sanderson converted and the hosts lead 6-0.

The re-start was completely sliced by Swinton, but fortunately for the West Manchester side they retrieved the ball and were able to mount an attack. After repeat sets the Lions wrestled their way over through Louis Brogan and we were all square. 6-6

Now Swinton could force the change in momentum, and Hunslet started to drop off tackles and rush out of the line as the Lions registered again through Lewis Charnock. 6-12

Having no possession the home side were under the cosh, and a certain Swinton try was halted by a last ditch Jimmy Watson tackle. The repeat sets were killing Hunslet, but when they did get possession Harvey Whiteley was unlucky not to score after a good break by Jordan Paga and Jordan Syme.

Both teams had good chances. A great team tackle halted Swinton over the line and the Lions were held up on another occasion. Joe Sanderson’s kick at the uprights bounced the wrong way for Hunslet and Jack Render went close for the Parksiders.

But tired defence saw George Roby score from close for Swinton in added time and at 6-18 it was a tough ask for Hunslet to claw their way back in. 6-18 at the break.

Swinton switched up a gear early in the second half and after drawing a Hunslet defender in the Lions broke down the right. Good passing saw Jack Hansen go under the posts and at 6-24 it looked as though Swinton may run out easy victors.

But this Hunslet team certainly don’t give in, and now had their best spell of the match. Constant pressure looked like it might wield a try, but the Lions’ defence held out until in the 58th minute when sharp passing sent Wayne Reittie diving over in the corner.

Joe Sanderson’s conversion frustratingly hit the crossbar and fell the wrong side, so at the three-quarter mark Hunslet trailed Swinton 10-24.

Swinton pulled the sucker punch, when after being lucky to get a 40/20 that looked to have landed short they created an overlap and Michael Butt scored in the corner. 10-28

Wayne Reittie scored a second try similar to his first to reduce the arrears, but it was too little too late as Swinton ran out 16-28 winners.

Man of the match Jimmy Watson was frustrated at the performance, thinking Hunslet could have pushed Swinton harder, he is certainly back in form after a fine match. As did Wayne Reittie on the wing and Jordan Paga at half back. But it wasn’t Hunslet’s day against a fine Swinton side.

Next week see’s a trip to West Wales who had their first win this week against Cornwall, before a week off to look over injuries and a trip to Doncaster on June 5th.